MONTECITO, Calif. - Caltrans, government officials and neighbors are celebrating the reopening of the once destroyed section of State Route 192 also known as East Valley Road where it was badly impacted in the January 2018 mudflow.

There were six broken bridges. This is the last in the series to be repaired and to reopen. The others were to the east over to Carpinteria.

Crews put the last signs up and ran sweepers through over the last few days before the ribbon cutting at noon today.

"Our goal all along at Caltrans has been to bring a sense of normalcy to this wonderful Montecito and Carpinteria community that is still recovering," said Public Information Officer Colin Jones.

Area residents say it will help them return to normalcy here after 22 months of detours.

"It looks great," said resident Andrew Schmoller. "This is all part of the long road back to where we were before, and this is a major step forward."

Trees near the creek still have mud lines on them where the rising water went, in some cases, 15 feet above the road.

It is in an area that carried heavy emotion with some residents. Many homes were destroyed in the shocking weather event and lives were lost. Two bodies were never recovered.

Caltrans says this project required the relocation of water, gas and utility lines along with a complete rebuilt of, what turned out to be, a wide bridge than it had before. The location is at Para Grande Road and it has a 90 degree 15 mile per hour turn. To the east is Hot Springs Road.

With the road closures for about two years, traffic was rerouted in several directions in Montecito causing many new circulation issues.

State Senator Hannah-Beth Jackson (D) Santa Barbara, said "these are major routes. Even if they are not as well traveled as our freeways. These are significant routes for traffic and for emergencies."

Santa Barbara County Supervisor Das Williams said, "It's also, I think deeper.   People have felt we were not completely recovered yet.
But this is proof we are going to get there and show we are a resilient community."

Caltrans worked on the disaster recovery projects in phases starting with the opening of Highway 101 were mud flowed off the streets and filled the highway below at Olive Mill Road during the massive storm. That was a 12-day project. Then it was on to the bridges.

Jones says this bridge reopening and the completion of State Route 192 work is, " important to the residents to take their kids to school and to bike and walk and take care of their daily lives. And it has been a huge disruption."

Nearby Olive Mill Road is being paved after it took a beating from the weather and thousands of heavy truck trips as part of the creek clearing work nearby.

Williams says the county is ready to do more roadwork in 2020 throughout the Montecito area and is still repairing some of its own problem areas from the mudflow including a problem site on Mountain Drive. 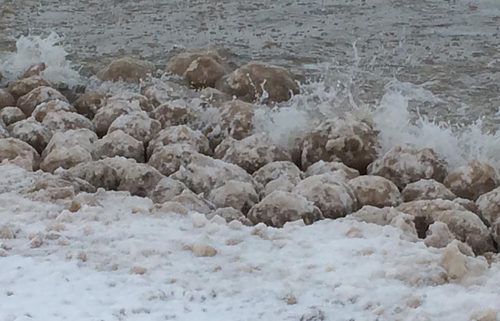