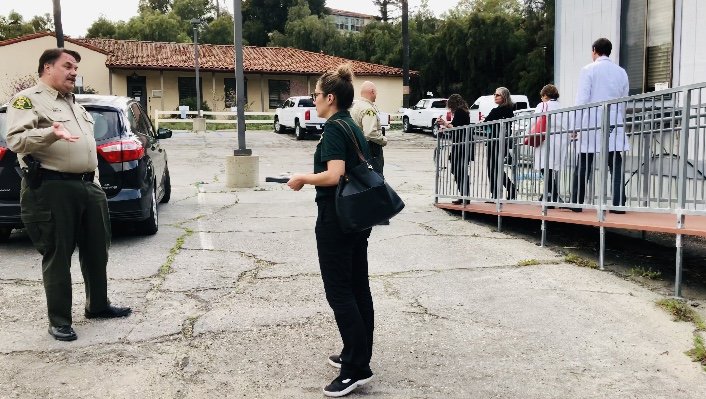 SANTA BARBARA COUNTY, Calif. - The Santa Barbara County Jail is increasingly discharging inmates early to prevent the spread of coronavirus among the people in custody.

Sheriff Bill Brown said they are the least serious offenders.

"The total is 30 inmates who have been released from our jail. That is roughly 3 percent."

There are currently 766 inmates in custody.

"That is the lowest in the county since I have been Sheriff."

They have not reported any inmates who have tested positive for the virus.

Brown said emergency medical service calls are down by about 10 percent and jail bookings are down by 67 percent.

"We are encouraging law enforcement officers to not arrest and bring people into the jail if there are alternatives."

On an average weekend the sheriff's office sees about 130 arrests that lead to bookings in the county jail. That was down to 42 last weekend.

But domestic disturbance calls are on the rise.

"Not unsurprising, people are at home together and sometimes they are not always getting along, but by and large we are seeing great success with the way our community is responding," said Brown.

He said his deputies will be steadfast in their effort to bring to justice criminal offenders who attempt to take advantage of the situation.

"Examples are conning other people by selling fake cures for the virus, people who engage in price gouging activities ,or people who burgle closed business for example, we will resolutely enforce the law."

He said most people are cooperating and adhering to state and local health orders.

Sheriff Brown said, "The order of the state public health officer issued March 19, 2020 requires all people living in California to stay at home or their place of resident until further notice, while there are limited exceptions that allow movement outside the home, the intent of this law is to disrupt and delay the spread of the Coronavirus. "

The goal is to protect the public and that includes inmates.

That is why the jail has temporarily stopped visitation, but it has increased phone calls for inmates.

Staff dining in the jail has been closed to anyone who does not work in the jail.

COVID-19 education is being provided to staff and inmates. They have stepped up cleaning in the jail and they have increased the distribution of personal hygiene materials to inmates and have encouraged them to frequently wash their hands.

If an inmate has serious symptoms they will be taken to the hospital and guarded if necessary.

The Sheriff said the Coronvirus will strain limited resources, but closed by saying, "We are all in this together, we will work together with those who we protect and serve to achieve the very best possible outcomes and we will succeed in defeating this virus."