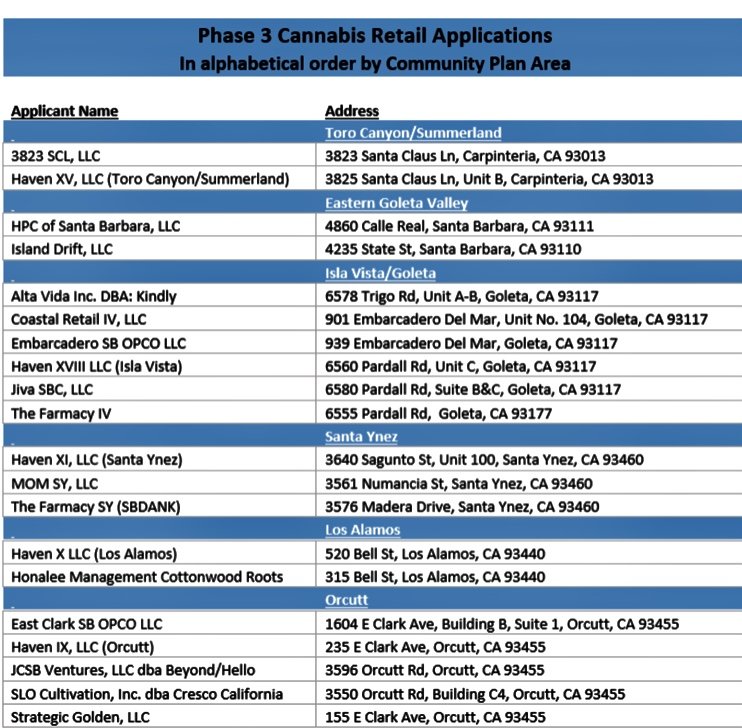 On Monday, the County's Business Licensing Team released its short list of locations in unincorporated areas.

There are two possible locations near Carpinteria on Santa Claus Ln., two near Santa Barbara, six near Goleta, three near Santa Ynez, two near Los Alamos and five near Orcutt.

The applicants are moving into phase three of the process, but only one in each Community Plan Area (CPA) will be invited to start the permit and business license application process.

Some business owners in the Padaro Beach Village off Santa Claus Ln. have already spoken against the nearby locations.

The owner of Coast Supply Company doesn't like the idea of having a marijuana businesses with security guards out front so close to his flooring customers.

"They're talking about armed security, the whole thing just sounds like the exact opposite of what we represent as a company."

Ryan Reed also said he doesn't think it's a good fit next to surf shops and surf lessons that draw a lot of children.

"I'm born and raised here in Carpinteria for us to have something like that so close our business I think it will change everything for us," said Reed.

Farmacy's Graham Farrar is on the list in other locations.

"We are particularly happy that our two locations in Isla Vista and Santa Ynez were selected to make it onto the next phase I think it is a win for the community , customers and taxpayers in Santa Barbara."

Neighbors are invited to submit input on a benefit and compatibility survey through March 7.

For a link to the survey visit cannibus.countyofsb.org.