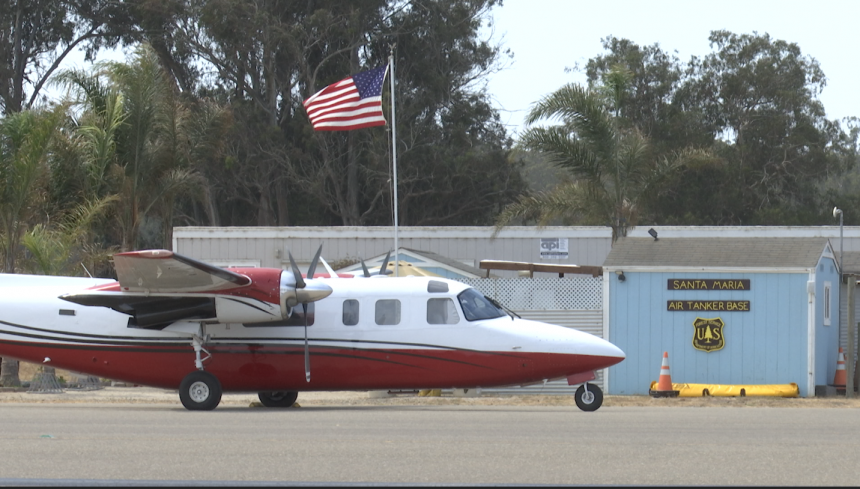 SANTA MARIA, Calif. -- The Santa Maria Air Tanker Base recently upgraded its facility just in time for the beginning of the start of the high fire danger rating period.

"We're ready to go," said Brian Sexton, U.S. Forest Service Aviation Officer. "We've made an upgrade to this base and added an extra pit where we have an extra 60,000 gallons of retardant available for use and it can service the very large air tankers."

The new fire retardant fueling station gives the tanker base, which is located at the Santa Maria Airport and is operated by the U.S. Forest Service, added ability to provide support during wildfire response.

"It's extremely vital," said Sexton. "The new pit is wide open. We can load a very large tanker like the DC-10 here at the airport. It increases our capacity and our ability to deliver to more retardant to the boots on the ground on the fire."

According to tanker base manager Andrea Helming, the new refueling station essentially adds a second base to the operation.

"This doubles our capacity," said Helming. "We can load three tankers here simultaneously on this side, same as the other side. Any air tanker that comes in here, we can load at the same time, so it's really quick. Get 'em in. Get 'em out."

The retardant contract runs from May 15 to November, but can be extended according to fire conditions.

"Depending on the need and the severity of fire danger still at risk, we'll stay open past that," said Sexton.

The tanker base, as well as the entire Los Padres National Forest area, also now has added extra staffing for the dangerous fire period.

The Santa Maria Air Tanker Base provides pivotal refueling support for wildfires that burn not only in the area, but also several hundred miles away.

"We have the ability to deliver quite a bit of retardant," said Sexton. "Santa Maria Air Tanker Base is uniquely suited to provide support firefighters and refuel aircraft to not only the Central Coast, but the Western United States."

As of Wednesday, no tankers or helicopters were stationed at the base. Instead, they were based at other bases scattered throughout the region.

Still, Sexton pointed out conditions could change at any time.

"We're always ready to go, but we're definitely anticipating we could have action at any moment," said Sexton. "If there is a fire response, it could be 15 minutes later, we could have a full house. There could be anywhere from half a dozen to a dozen tankers. We've had as many as 10 here at one time."

With weather conditions especially dangerous this week, including triple digit temperatures in many areas, low humidity and high winds, crew members said there are ready to spring into action.

"We've upstaffed due to the weather and right now it's just a waiting game to see what happens," said Helming. "It's definitely on our minds and we're ready to go."