Secretary of State Tony Blinken will meet with Russian Foreign Minister Sergey Lavrov at the Arctic Council ministerial in Iceland next week — the first face-to-face meeting between a Biden cabinet official and their Russian counterpart.

Their meeting in Reykjavik comes ahead of a potential summit between Presidents Joe Biden and Vladimir Putin. No date has yet been made public for the possible meeting between the two leaders, although Biden has said it is his “hope and expectation” that he will meet with his Russian counterpart during his trip to Europe next month.

Tensions have escalated between Washington and Moscow in recent months. The United States imposed a sweeping set of sanctions and diplomatic expulsions in response to Russia’s SolarWinds cyber attack, its interference in US elections and its ongoing occupation of Crimea. Russia responded with its own sanctions, diplomatic expulsions and restrictions on the US Embassy in Moscow.

In addition to discussing their upcoming meeting in a phone call Wednesday, Blinken “reiterated President Biden’s resolve to protect US citizens and act firmly in defense of US interests in response to actions by Russia that harm us or our allies,” according to a State Department readout.

He also called for the release of US detainees Trevor Reed and Paul Whelan and “provided the Minister an overview of U.S. policy toward (North Korea), and the two committed to continued discussion on issues of mutual concern,” the US readout said.

A statement from the Russian Foreign Ministry said Lavrov and Blinken discussed issues including the “nuclear problem of the Korean Peninsula,” the Iran nuclear deal (JCPOA) and their participation in the Arctic Council meeting next week where the two are due to meet.

“They also touched upon the interaction of the two countries in the Arctic Council (AC), including in light of the transfer of the chairmanship in this structure to the Russian Federation, which will take place at the ministerial session of the AC in Reykjavik on May 20, 2021,” the statement said, adding Lavrov and Blinken agreed to hold a separate meeting “on the sidelines” of Arctic Council “to consider key issues of bilateral relations and the international agenda.”

Biden said last week that he hoped to meet with Putin during a planned visit to Europe in June.

“We’re working on it,” Biden said, suggesting his proposed summit talks with Putin could come as soon as the middle of next month, when he will be in Europe seeking to restore trans-Atlantic ties on his first foreign trip as president. 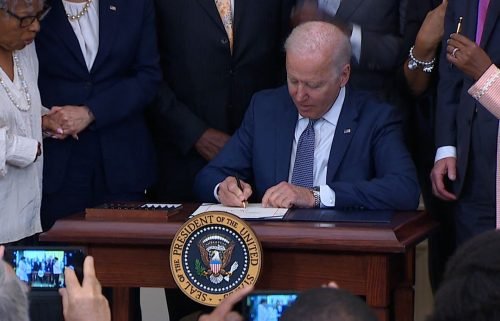