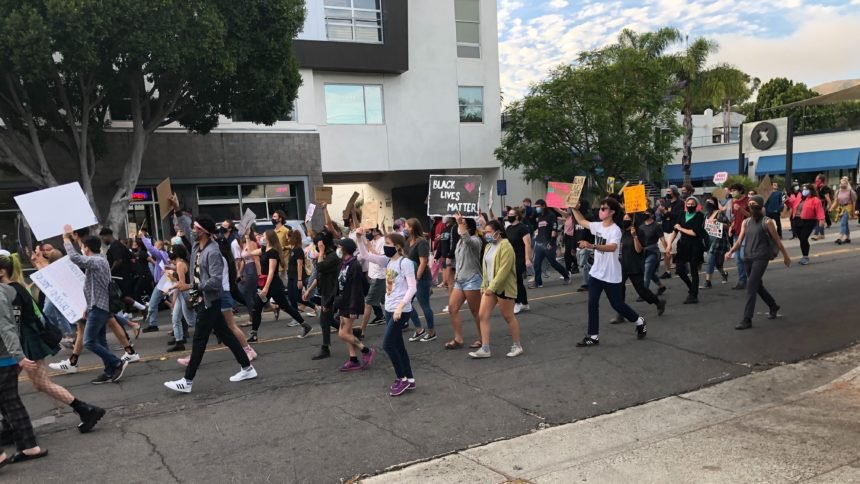 SAN LUIS OBISPO, Calif. - The organizer of a San Luis Obispo Black Lives Matter protest was arrested after multiple cars were damaged and another surrounded by the crowd.

The protest began late in the afternoon and stopped traffic in San Luis Obispo.

The march entered into Highway 101 and occupied both north and south lanes. Highway 101 was closed in both directions at the Osos on and off-ramp.

According to the San Luis Obispo Police, while on Highway 101, protesters damaged the hood of a car and shattered a rear window where a 4-year-old child was in the back seat and had glass shattered on him.

When moving downtown, multiple protesters stopped and surrounded a car at Monterey and California before returning to Mitchell Park, police said.

SLOPD says they began reaching out to organizers on Monday morning when they became aware of the planned protest. Police officials said they were assured by Tiana Arata, purported to be the march's organizer, the event would remain peaceful at Mitchell Park.

During the march, Arata was arrested. Police say she faces charges for participating in a riot, unlawful assembly, conspiracy, unlawful imprisonment, and resisting arrest.

While Arata was being arrested, the arresting officer was allegedly assaulted by a person, who was then arrested as well.

“The City of San Luis Obispo supports peaceful protests,” said Police Chief Deanna Cantrell, “but we will not support violent acts and will continue to take action to protect our community.”

The protest ended around 8 p.m.

Police ask for anyone who received or witnessed any property damage to contact the department at (805)781-7312.