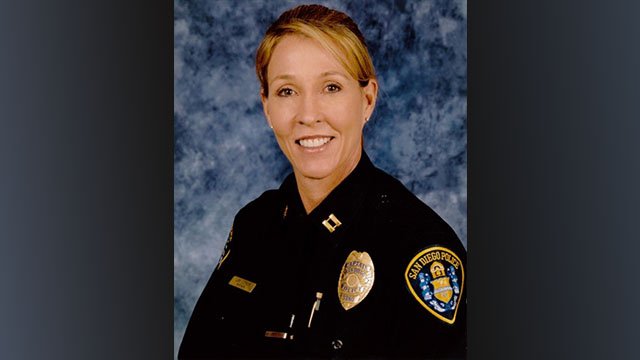 Police Chief Luhnow said Santa Barbara officers have been practicing de-escalation and community dialogue for years and should be recognized for their fine service.

She also thanked the community for all of the 'Thank You's' and messages of support they have received so far.

The Police Chief went on to list the policies Santa Barbara police have been implementing even before the national call for police reform. These policies include requiring de-escalation measures, implicit bias training, allowing public access to police records/violations and more.

Chief Luhnow's full message can be read below:

Communication is fundamental to how we relate to one another. People are able to convey how they see and experience the world through communication. We are able to develop empathy and change our views of the world through listening to other’s perspectives. We also send strong and impactful messages by what we choose Not to say. I have recently listened to, and spoken, much about contemporary policing, police accountability, and how we as an agency respond to the changes in societal norms and expectations. But I would be remiss if I didn’t address a void.

We need to publicly express support for the fine women and men of the Santa Barbara Police Department. What hasn’t been said matters. It matters to the officers and detectives who, day in and day out, respond to our community when they call for help. It matters to the men and women who answer the thousands of calls for help from our community which have not ended up in national controversial social media posts. It matters to the families of these officers, who see all over media outlets, hateful messages about police and threats against their lives because they wear a blue (or tan) uniform. Being proud of our officers and wanting police to evolve as a profession are not contradictory concepts.

The officers of the Santa Barbara Police Department have been practitioners of important concepts such as de-escalation and meaningful community dialogue for years. Yes, we constantly work to improve from evidence-based practices and push ourselves to expand our worldview, as all law enforcement and other government agencies should do. But let’s recognize our local officers for the fine service they provide, while continuing to move forward and participate in nationwide calls for systemic changes in the criminal justice system. Thank you to those individuals in the community who have stopped our officers on the sidewalk to say thank you, and taken the time to send handwritten notes of support.

These are difficult times. I respect those who demand equity and peacefully protest against systemic racism. I stand with you. It is not your fight. Its our fight. Everyone owns it. But I also stand with the men and women of this police department. If you think you have to choose between the two (fighting systemic racism or supporting SBPD officers), you haven’t spent much time with our officers.

Below are several items that have been requested and demanded by various organizations of local and national concern which are already implemented at our department.

The Santa Barbara Police Department Policy Manual requires de-escalation measures, a duty to intercede when wrong doing is witnessed, duty to preserve life and render aid regardless of circumstance. Discrimination is of course prohibited, so are choke holds. All uses of force are required to be documented.

SBPD reports all use of force incidents resulting in serious bodily injury and/or the discharge of a firearm to the California Department of Justice.

Community members sit on interview panels for all promotional interviews for Sergeant and Lieutenants.

SBPD VOICES dialogue is an evidence-based community conversation model recognized by the International Association of Chiefs of Police and has been highlighted in policing publications.

SBPD Volunteers in Policing (VIP program) brings the community into the police department in official positions. It allows community to engage with other civilians who are ambassadors of the department. Each brings outside perspective to/expertise to department culture. That fosters a relationship between officers and civilian community.