Partly to mostly cloudy skies will continue into the weekend.  The light offshore flow will significantly strengthen late on Friday through Sunday. High temperatures will remain near or above normal through the upcoming weekend. Expect highs in the mid to upper 60s.  Lows in the 40s.  A cutoff low in the southwest is bringing a chance of showers.  Best chance for now looks to be on Saturday and Monday.

Wind advisory for Ventura County Friday and Saturday as strong northeasterly winds pick up across the region.  The San Luis Obispo County Central Coast will have a wind advisory from 2AM to 11AM Friday.

There is an upper level low off of the Washington-Oregon coast and associated trough along the California coast to about mid- state. As that trough moves to the east it will aid the conditions for offshore flow expected Saturday.

There is also a cutoff low to our southwest that is currently bringing mid and high cloud cover and it approaches it brings us a chance of light showers both Saturday and Monday.  Showers will be light and amounts would be small, expecting just a couple hundredths of an inch of anything at all.

Monday will be the last day of this cutoff low impacting the area, and bring a chance of some light rain. More confident in that the low will bring enough clouds to produce another cloudy day. The offshore flow will weaken to near neutral and winds will not be a problem. The increase in clouds and decrease in offshore flow will combine to bring 3 to 6 degrees of cooling to the area. More sunshine and a slight warming trend should begin on Tuesday and continue into the end of the week. 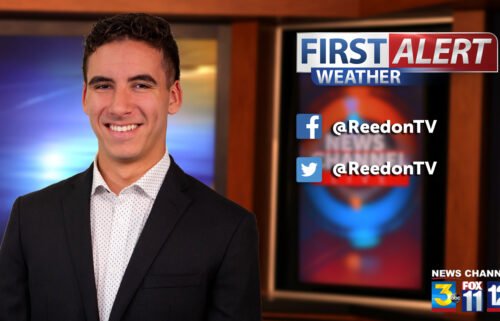