"So the two primary variants of concern that we're finding in Santa Barbara County are the B.1.1.7, originally identified in the United Kingdom and, what we call the 'West Coast variant.' It's actually a pair of twin variants B.1.427 and B.1.429," said Dr. Lynn Fitzgibbons.

Fitzgibbons, an Infectious Disease expert with Cottage Health, is a member of the Local Variant Research Team along with her collaborative partner, Professor Carolina Arias at UCSB and, Pacific Diagnostic Laboratories. Together, they now have hundreds of sequences from the Santa Barbara County area, looking as far back as November.

"There are a little over 100 from the month of March, alone," said Fitzgibbons. "What we've seen in Santa Barbara County over last two or three months has been a significant shift towards more West Coast variants thru January and February. But then, a very important shift that happened through the month of March and into April where we're seeing a much higher portion of the UK variant. Right now, about three-fourths of the variants that we've sampled through the month of March are one of the two variants of concern, the West Coast variant or the UK variant."

As many people now know, variants are more infectious and ramp up concerns for an increase in more severe disease and, a slightly increased risk of death. Fitzgibbons said the good news is Santa Barbara County's vaccines are a good match for these variants.

The Cottage Health Infectious Disease expert is among those around the world keeping close tabs on the catastrophic surge in COVID-19 cases and deaths happening right now in India.

"There are likely many factors contributing to that devastating surge. One important question is what variant is circulating in India."

Fitzgibbons said health experts highly suspect a variant that was previously known as the 'double mutant.'

"Came from the fact that it had two famous mutations: the L452 and the E484K -- now known as B1.617. This variant looks like it's playing a big role in what's going on in India this week."

She pointed out that E484K specifically is a mutation that was associated with P1 from Brazil and the South African B1351.

"And the reason E484K is a famous mutation is that it changes that outer spike protein a little bit and we think it may increase the risk of things like reinfection or perhaps a decreased effectiveness of some of the vaccines. Just to be clear, the vaccines are really holding up well in the vast majorities of studies but the even subtle differences in vaccine efficacy when you talk about a whole population, could be important."

Here at home, a world away from India, our pandemic story is a stark, brighter contrast.

Fitzgibbons said the Local Variant Research Team will release additional results on the community dashboard on Thursday, April 29. That will include a set of results from April. 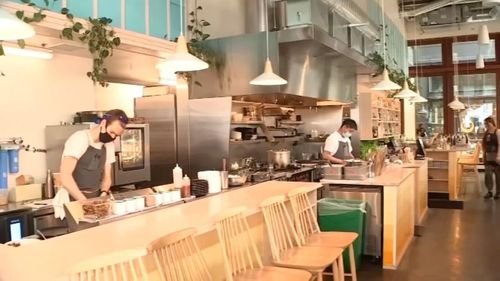