SANTA BARBARA, Calif. - Looking for the Helpers this week led the NewsChannel team to a local teen, soaring to new heights.

Peter Moschitto is a great example of the importance of bettering oneself while helping others. And, there’s an added bonus: the Boy Scout built new memories with his dad while earning the highest honor in scouting.

It’s been pure teamwork between Peter and his father Mike, starting in August of 2020.

“Peter got into Scouts when he was seven. Now, he's 15 and he's getting ready to get his Eagle Scout badge,” said Mike Moschitto.

That badge of honor came in the form of a new sandbox and mudpie kitchen -- built from scratch -- for kids at the Cliff Drive Care Center at the Free Methodist Church.

“All of the Trex was donated through Hayward Lumber and all of the sand was donated from Santa Barbara Stone. And, the redwood from Allen Construction,” said Peter.

The father and son team started the project in the driveway of their Santa Barbara home last summer, and worked through the pandemic into the first of June.

“He kept on this project and it was easy to let it slide and not follow up but every weekend he'd say, 'Ok, what do we have to do this weekend?’ I was very proud of him, keeping on this project,” said Mike.

“It’s been a lot of work,” said Peter. “He’s (his dad) been a great help. He's done a lot of building and he's been really helpful with logistics.”

“He’s been doing a lot of the work and I've been helping him just with power tools and those kinds of things,” said Mike. “We probably have, what do you think, Pete? Maybe 100 hours into this thing so far?”

Moving day last weekend meant hauling all the materials to the site on the Mesa, assembling the pieces and using shovels to dig out the old sandbox and make room for the new, hand-crafted addition. Members of Peter’s Troop 1 Santa Barbara (the oldest Boy Scout Troop west of the Mississippi!) helped with the installation.

In the end, it might be hard to tell who will enjoy this project most -- the proud father and soaring Eagle Scout or the mud-pie making kids.

“I’m excited to see them play with it,” said Peter. “It’s a big upgrade I feel from the current sandbox.” 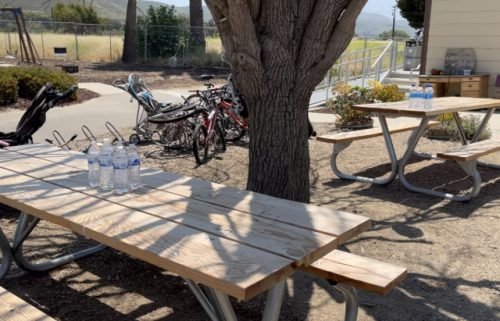