INDIANAPOLIS, Indiana. - The Creighton Blue Jays do not plan on letting UCSB star JaQuori McLaughlin beat them in their NCAA Tournament game on Saturday.

McLaughlin has had a stellar senior season and was honored this week as an Honorable Mention All-American by the Associated Press.

Creighton head coach Greg McDermott had high praise for the 6'4 guard saying, "McLaughlin is terrific, probably one of the best movers off the basketball that we played this season. It goes without saying that he is great with the ball in his hands."

McLaughlin averaged over 16 points and 5 assists per game this year leading UCSB to a 22-4 record and a Big West regular season and league tournament championship.

As for defending the Big West Player of the Year, McDermott said, "We'll guard him with size some and physicality, we'll try and guard him with quickness at times and we'll run some guys at him at times so we will give him some different looks in hopes we can keep him as uncomfortable as possible." 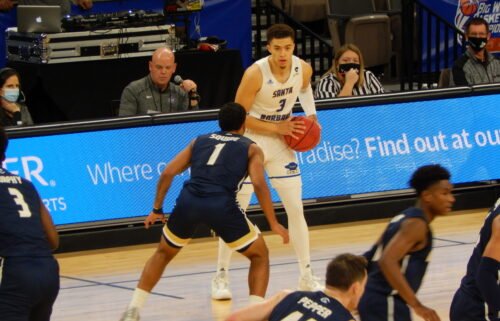