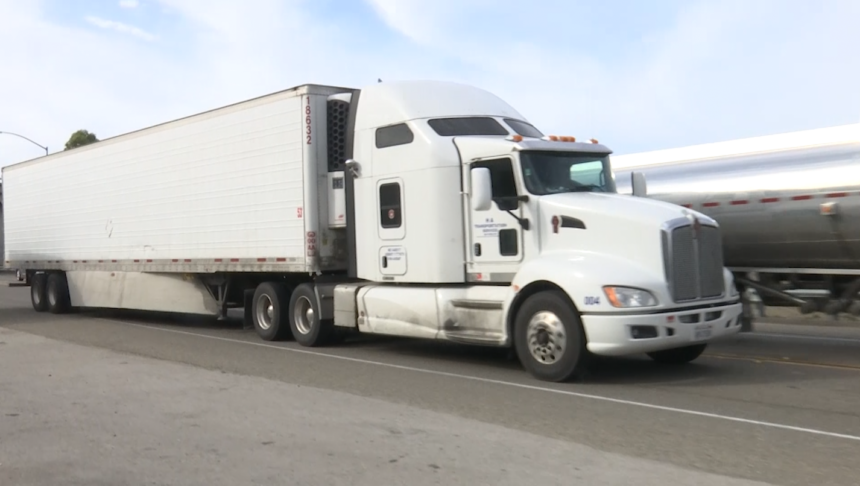 SANTA MARIA, Calif. -- Skyrocketing fuel costs are hitting the trucking industry hard, creating a domino-effect that is being passed down to consumers.

The price of diesel continues to rise on a daily basis. According to AAA, the average price of a gallon of diesel in California is $5.69, an increase of 10 cents from just one day ago.

"The average price is $5.69," said Jim Philson, Western Trans Logistics owner. "I'm already seeing $6 and $7 prices on diesel posted from carriers of ours up and down the state and I expect that go up."

In California, the price of diesel has jumped nearly 70 cents in just the past week alone, and more nearly 80 cents over the past month.

According to Philson, who provides freight management from his Arroyo Grande-based business, high prices at the pump will directly impact consumers.

"We're going to see that have a direct impact on the consumer for prices and goods," said Philson. "The price of end goods being delivered is going to have to go up and that means higher prices at the shelf, so your grocery bill is going to go up, and it's just a factor of what's going to happen."

As the prices of fuel rises, retailers that rely on trucks for delivery have no choice but to pass along the addition costs in the products and services they provide.

"Now that the fuel prices are going up, somebody has to absorb that cost, and unfortunately, it ends up being the end user," said ​​​​​Chryssa Hunlock, Central Coast Truck Center service manager. "I think the rising fuel cost is only going to turn into higher cost for everyday products that we're seeing."

The cost to fill up a semi-trailer truck is extremely expensive, and with prices going up seemingly on a daily basis, it gets more financially demanding with each passing day.

"$700 to $1,400 to fill up, depending on the truck, the application, the size of the tanks they have," said Hunlock. "It's always been expensive and now it's all the more expensive."

Hunlock, who has worked in the trucking industry for several years, pointed out the high fuel costs are especially troublesome for smaller companies.

"The margins for profit in the trucking fleet depending on the size, and the vast majority of the truck that are on the road, the higher percentage is owner-operator, so a guy with one, to five, to maybe 10 trucks, they're going to feel this the hardest," said Hunlock. "Some of your mega-fleets, the ones that we're used to seeing out there, they have a little more room to absorb costs. It still hurts, and they're still going to be charging that on the backside, to the carrier, the person they're moving it for, but on the smaller fleets, it's got a major impact on them."

Hunlock added the fuel crunch comes at the same time the industry continues to deal with a national driver shortage, as well as supply chain shortages.

"It's hard enough to keep the trucks on the road, keep a driver behind the seat, and now they're having to struggle just to pay for the fuel," said Hunlock.

Unfortunately, for both truck drivers and trucking businesses, as well as consumers, it doesn't appear prices will likely be going down anytime soon.

In addition to the ongoing Russian invasion in Ukraine, which has thrown the global petroleum market into a state of uncertainty, it's also close to the spring and summer seasons, when gas prices in California annually reach their highest levels.