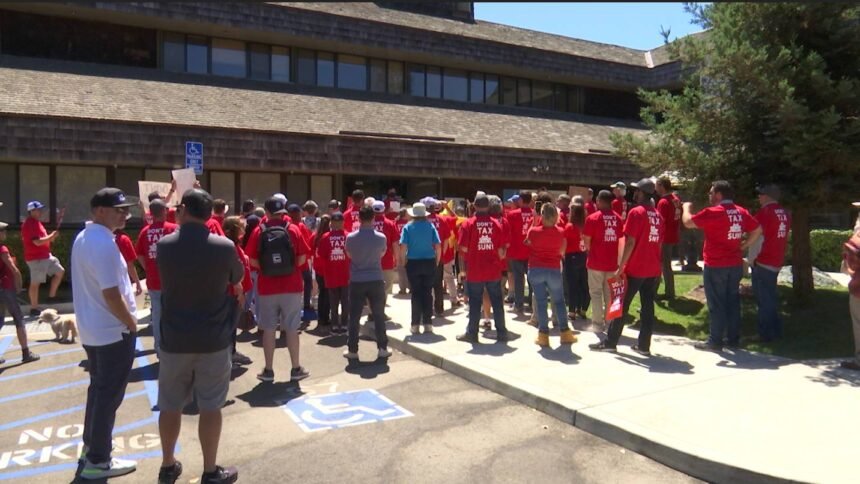 The gathering was held by SLO Climate Coalition, as well as Save California Solar, and was part of a statewide effort to protest proposed changes that may significantly alter rules for rooftop solar panels.

"We're here today to send a simple message to PG&E, the governor and the Utilities Commission to stop the solar tax," said Carter Lavin, California Solar & Storage Association membership director. "PG&E and the other utilities have spent millions of dollars in the last few years pushing for an anti-solar attack, trying to turn neighbors against neighbors, and we're telling them to cut it out. Solar should be more affordable for more Californians, not less."

The California Public Utilities Commission (CPUC) is considering a controversial move that that would reduce current incentives for homeowners to install rooftop solar panels.

If approved, the state's "Net Energy Metering (NEM)" system would be changed. It's the program that's been in place for more than two decades that provides financial credits for solar users for the amount of energy they return back into the statewide electrical grid.

"They're trying to add about $300 to $700 a year in taxes and fees to solar customers, potential solar customers," said Lavin. "There's some retroactive cuts to existing customers that have been part of this proposal and a lot of other nasty things, and we're telling them, look, we should not be making it harder for people to go solar in California. This tax would make it unequitable. This tax would make it so working-class Californians cannot get solar. This net metering proposal that we're protesting is something that would make solar only for the very few who could afford it."

However, supporters of the proposed policy changes say an update to NEM is badly needed.

Affordable Clean Energy for All is a statewide coalition of more than 120 groups including seniors, consumers, environmental and business groups that is currently advocating for NEM reform. The coalition also includes a several utility companies, including PG&E and Southern California Edison.

"We would like to see reform of the state's net energy metering program to reduce and eliminate the cost shift that currently exists when people with solar panels don't contribute their fair share to the grid maintenance charges, wildfire charges, low-income programs and others,' said Fairbanks. "Those costs don't go away. They need to be made up by someone and the someone is people without solar panels, who tend to be from disadvantaged communities, who tend to be renters who live in apartments, seniors on fixed incomes. They're paying higher utility bills to cover the costs that should be born by people who own solar panels."

Fairbanks added non-solar users now pay $240 each year to cover the costs that people with solar panels aren't paying. She also said the cost is expected to rise to more than $500 by 2030.

"We're not saying end all the subsidies," said Fairbanks. "We still want to see solar panels continue to proliferate in California. We want to see more people put them on rooftops, absolutely, that's a really good thing. The only question that's being debated right now is who is going to pay for the subsidies and how much will those subsidies going to be? And our position is, let's make the program more equitable for everyone and not just stick non-solar customers with the bill."

After starting the rally at the busy corner of Higuera and Marsh streets, activists, which numbered a few dozen, walked up to the nearby PG&E offices to hand deliver a message to the energy company.

"About 16,000 Californians in the last couple of days have signed this petition telling PG&E and the other utilities to cease-and-desist with their anti-solar attacks," said Lavin. "Basically the message says solar should be more affordable for more people and these dirty tricks that they're playing, these front groups, these campaign contributions, all these things that they're doing, is pushing solar out of reach middle class and working-class Californians, and we need to reverse them and they need to stop what they're doing."

Tuesday's rally in San Luis Obispo was one in a series of similar "Don't Tax the Sun" rallies held across California over the past few days.

Other rallies have been held recently in Los Angeles, San Francisco, San Diego and Bakersfield, with more planned in Fresno, Santa Cruz and Chico later this week.