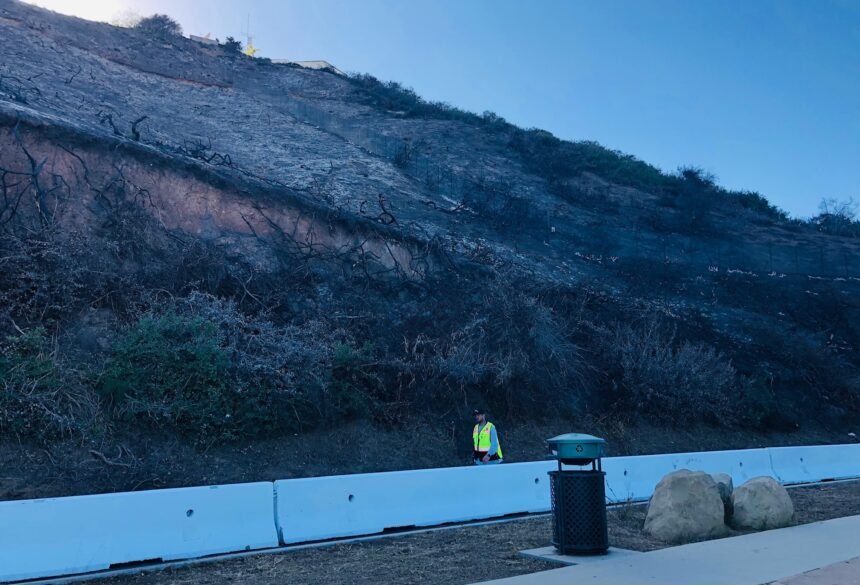 SANTA BARBARA, Calif. - For the next 8 months, a portion of Loma Alta Drive will be closed to traffic.

People who live near Loma Alta Drive know it's for their own protection.

Most remember the Loma Fire that burned near their homes on Thursday night, May 20.

A small area below the street burned, too.

Police arrested a 23-year-old man suspected of arson and drug use after they said he was found hiding in the brush.

They said the road would be closed between Coronel Street and West Canon Perdido Street through May of 2022.

Bryan Rodriguez works with Santa Barbara's street operations and said, "We are just laying down 32 k-rails about 640 feet for precaution for homeowners at the bottom of the hill."

He said the machines help them do the work.

"This whole hill was on fire right across from my house. I remember hurrying over and trying to get all my stuff, and just seeing the whole hill on fire from the 101. It was pretty intense," said Tilton.

He was caught off guard by the road closure on his way home Tuesday afternoon.

"I'm just disappointed because this is my favorite little shortcut, I like to take this down to my house on Oceano, it has a great view of Santa Barbara."

Julia Goss remembers the fire, too. She evacuated with her family and stayed with relatives until it was safe to return home.

A longtime neighbor said the hillside has never been a threat, until now.

People who recall the deadly Montecito Mudslide are well aware of what can happen after fire and rain.

Light rain will help the roots grow, but heavy rain could cause a debris flow.

The sidewalk that has an ocean view remains open.

A father pushing his baby in a stroller watched crews finish their workday.

Elijah Parker stopped on his bike to check it out.

Parker said he still plans to ride his bike to and from work on Loma Alta Drive, but if it rains he will likely take another route.