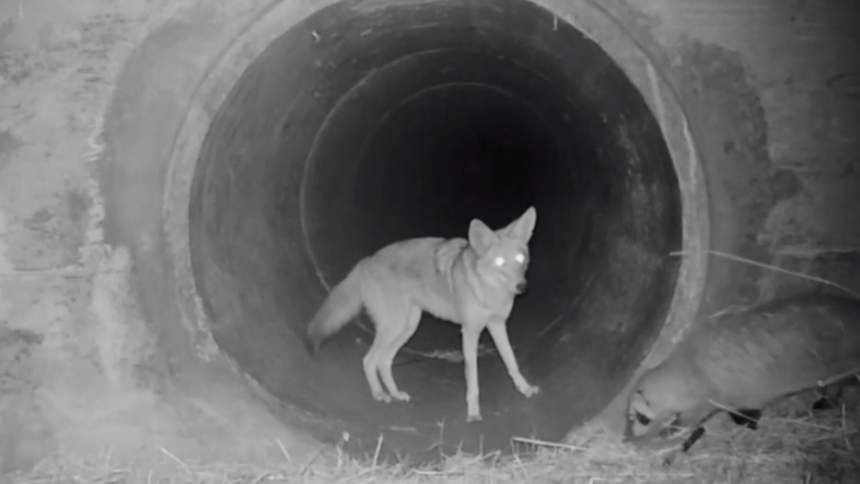 SAN LUIS OBISPO, Calif .- Caltrans is working on keeping drivers and animals safe by teaming up with a wildlife organization.

While conducting studies, the organization caught an unlikely pair of wildlife crossing under a Gilroy highway that went viral.

A coyote and badger were caught on video being chummy crossing under the highway culvert: two known predators playing! That's just one example of the work Caltrans is doing here on the Central Coast to keep animals and drivers safe.

They continue to build fencing for animals throughout SLO and Santa Barbara Counties to keep drivers and animals safe.

“A lot of people may not realize that we have a team of biologists within our department who are experts in migratory animal behavior,” said Caltrans District 5 Public Affairs Officer Jim Shivers.

Caltrans partnered with Pathways for Wildlife who did the study that captured the coyote and badger.

The studies are to identify locations along highways where safety improvements can be made for animals to cross.

“Our mission, of course, is to keep the highway safe for everyone and that certainly includes wildlife,” said Shivers.

Caltrans has put 8-foot fencing along Hwy 101 north of the Cuesta Grade. That fencing channels animals to nearby railroad under crossings to avoid highways.

“Along stretches of HWY 101, in the Santa Margarita Area, along HWY 46 E near Paso Robles, and along Hwy 246 between Lompoc and Buellton,” said Shivers.

Caltrans utilizes the underground tunnels to funnel animals all throughout Santa Barbara county.

"By doing that we are reducing the potential for collisions between vehicles and animals,” said Shivers.

Another animal pass is planned to be built over Los Angeles on HWY 101, which is reported to become the largest wildlife crossing in the world.