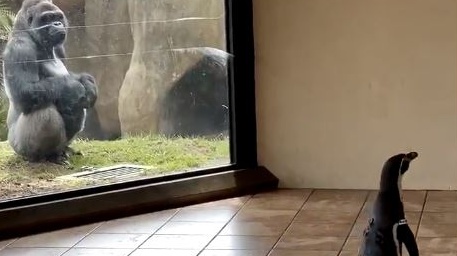 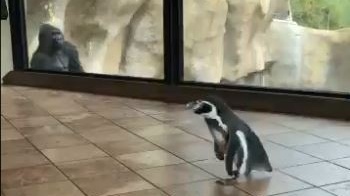 SANTA BARBARA, Calif. - The Santa Barbara Zoo was closed during the COVID-19 pandemic, but that doesn't mean all the exhibits were closed.

Some Zoo animals were able to walk around some of the exhibits and meet the other animals. Like Monty the 5-year-old Humboldt Penguin and his handler Ellie.

The zoo began to document Monty's visits to other exhibits, calling them adventures.

Monty's first adventure was to the rabbit enclosure, where he met a rabbit named Honeybun:

Monty's second adventure was to the gorilla enclosure, where bachelor brothers Nzinga and Bangori live.

For Monty's third adventure, he took his first steps down the stairs.

Monty's fourth adventure took him outside of the exhibits and into some green grass.

For Monty's fifth adventure, he went to the giraffe enclosure, and made a new friend, Michael.

Monty wasn't the only animal able to wander around the other exhibits. Bam Bam the porcupine also joined in on the fun. Zoo staff put Bam Bam in a harness to walk her around.