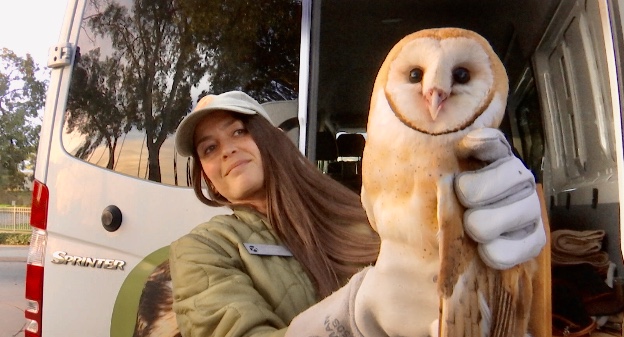 SANTA BARBARA, Calif. - When drivers spotted an owl near the center divider of the 101 near Milpas in Santa Barbara in early December, California Highway Patrol officer Sean Kelly came to the owl's rescue.

Kelly said it wasn't moving. He soon found out it had a broken scapula or shoulder blade.

An Ojai Raptor Center volunteer named Gary Paudler delivered it to Ojai where the female adult owl had time to heal.

On Tuesday, as the sun was about to set , Officer Kelly, his brother and other fellow officers joined in the release at Chase Palm Park in Santa Barbara.

The center's Jaclyn DeSantis said it would know how to fly home.

DeSantis handed Kelly a blue plastic crate contained the owl and helped him open it.

The owl flew away toward some palm trees and then circled back as if to say thank you before flying off into the sunset.

The Ojai Raptor Center counts on donations to cover the costs of wildlife rehabilitation and education. For more information, visit www.ojairaptorcenter.org or call (805)649-6884.