SANTA MARIA, Calif. - Residents in a quiet neighborhood are sharing their stories after a shooting took place in Santa Maria.

It was an unexpected event for the quiet and safe neighborhood on the 600 Block of North Palisade. Officers responded to the shooting around 3:20 pm.

One male victim was shot and flown to Cottage hospital. Officials say at this time they do not have any leads, however, many eyewitnesses said they heard four or five gunshots, then saw a silver car speed away from the house where the shots originated.

“I was just inside watching TV and I heard five bangs - bang, bang, bang - like that,” said eyewitness Rod Sanchez

That's when Sanchez ran outside to see what was happening.

“There was a guy in the driveway. Then I just heard some moaning or groaning and then some guy took off in the car,” said Sanchez.

The neighbor who lives directly next door said before he heard gunshots he could hear an argument ensuing.

“It escalated and then someone said not to do it because there were kids in the house and then there were five shot and that was it,” said the next-door neighbor, who preferred not to be identified.

Detectives are still investigating the crime scene and are concerned because neighbors have been reluctant to speak to them.

“We have a victim suffering from gunshots wounds. There is a real limit on the amount of people that are coming forward and talking to us. That is obviously problematic for us because it's broad daylight,” said Santa Maria Detective Lt. Paul Van Meel. "This is a fairly occupied street, with a lot of people out so we really rely on the public coming forward giving us what information they have. It's really necessary and vital in these investigations."

Residents say they are now afraid of what might happen next after this act of violence happened where they live.

“It's a pretty quiet neighborhood, it's a nice neighborhood. These things don't really happen in this area, so it's unnerving,” said a neighbor who asked to remain anonymous.

Police have yet to confirm the eyewitnesses accounts and will continue their investigation. 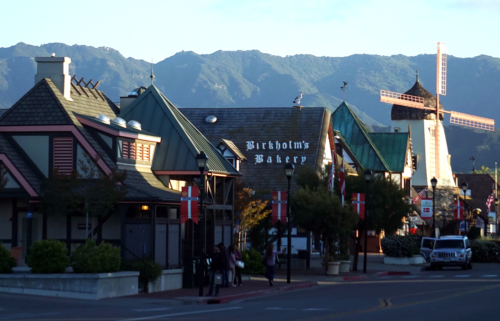