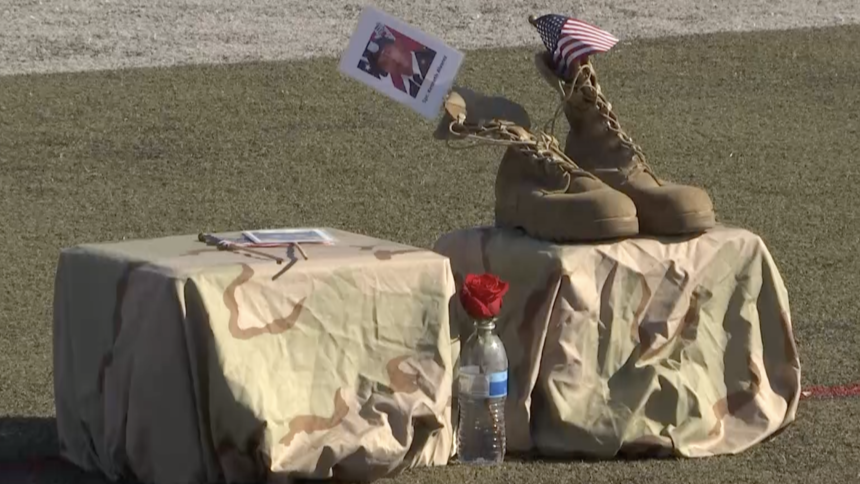 SANTA MARIA, Calif. - A mother who lost her son at war held a 'Run to Remember' at the Santa Maria Football Field Sunday night. The event honored her son and soldiers who are no longer with us.

Monica Diaz was compelled to start 'Run to Remember' after her son passed in the Iraq War.

Participants choose from a box of 1800 photos of fallen soldiers. Every mile ran is in honor of that war hero.

“This is not just about my son, this is about everyone's sons, daughters, husband, wife, brother, sister,” said Diaz.

Steven Baird, the CEO of Santa Maria's nonprofit Band of Brothers, came out to show his support along with many other vets.

“This one right here is army private first class Roberto Baez," Baird says as he shows a photo of a fallen soldier. "He was 19 years old from Tampa Florida. Assigned to the 3rd Battalion, 50th Infantry Regiment."

Baird led the group in doing 22 pushups, telling the supporters that every 22 minutes a veteran takes his own life.

Life that Diaz knows firsthand can be taken for granted.

“We don't realize the sacrifices that are being done, not just by someone that are serving overseas and in the military, but by the families that are left behind,” said Diaz.

The event started at 5 a.m. Hundreds of community members attended.

The event's donations go to the Fisher House Foundation that supports veterans and their families that have been injured during their service. The run went until midnight and all were welcomed and encouraged to stop by.