SANTA BARBARA, Calif. - Just as Santa Barbara County was ready to come down strong on those who are not wearing masks in violation of the health orders in place, a more tempered voice came from the County Board of Supervisors.

Supervisor Steve Lavagnino said the number of coronavirus cases has dropped in recent weeks overall. He favored more outreach and education instead of tougher enforcement in the hands of law officers or others who would be designated from various levels of county government.

The county has also taken steps to make sure the mask rules are followed to bring down the spread of COVID-19 including Public Service announcements, messages in various languages, more signage and updated social media pages.

"The focus of the county's efforts has been on education and persuasion, and this effort will continue," said Barney Melekian, the Assistant County Executive Officer Over Public Safety.

He reminded the county, the 211 call center is available to answer questions and explain the rules.

An urgency ordinance has been formed to manage the issue even further.
"There are programs active in several of the cities (to do outreach)," he said.

The county has weekly meetings on the issues and an Education and Enforcement task force. There is a wide range of actions that have been considered.

"There really hasn't been anything in the middle ground" said Melekian,   "in the terms of fines or the suspension of licenses."

Administrative fines recommended by the county were  "$100 for the first offense, $200 for the second offense and $500 for the third offense (and beyond) said Melekian. "Those are maximum numbers, not mandated."
The board heard from many members of the public who were opposed to the enforcement plan.

"The only way we can help society return back to normal is reduce that infection rate," said Supervisors Das Williams.   He said mask wearing has proven to be beneficial.   "It is a small price to pay to return to a free society.  A society where kids can go to school.  A society where we can move about without fear."

Supervisor Hartmann called it an "ultra-marathon. We can't keep thinking of this as a sprint."   She said the fine suggested is an administrative remedy not a jail offense, and advised the public, "please pay attention."    Hartmann says she is aware of civil liberties and the over reach of government but does not feel this is happening with the proposal.

The position on a mask enforcement plan was not unanimous.  For now, the urgency ordinance has been called off. A regular ordinance will be reworded and brought back to the board in the weeks ahead if necessary.

An urgency ordinance can be implemented immediately. The regular ordinance going through the process will still take 30-days to implement after it is approved.

Supervisor Steve Lavagnino says he is in the public service outreach campaign wearing a mask and wears one when he is out.   He did not support the latest plan beyond education and outreach.  Once "we spoke in a language they understand,  we saw a lot more compliance with the rules," he said.
Our numbers are churning in the right direction,  "at one point do we say we're there?" he asked.

Mortgage delinquencies and unemployment numbers are at the highest levels in recent years, and Lavagnino said, "this is a giant bubble and eventually this thing in going to pop."

"I think this is a well intentioned but profoundly bad idea," said Supervisor Peter Adam.

"We (Santa Maria) have been in the leader in cases since the beginning of this thing.  It does affect the county as a whole.    We as one county were struggling with this as a county.   We need as much outreach as we can in I.V.,"  said Supervisor Steve Lavagnino.  He also noted the numbers were going down in recent weeks.

The county also received an update on flu vaccinations. Van Do-Reynoso says the county has been working on the roll out of shots and clinics for weeks.

As the public is dealing with COVID-19 testing,  now comes the worry over flu season which generally begins in October.

Already mass flu vaccination clinics are planned.
"(We are) doing more than what we have done in previous years and in addition to that, doing mass outreach," said Do-Reynoso.

She did not recommend a flu shot prior to that although they are available.

Some medical studies show after four to six months the benefit of the flu shot wears off.

The annual flu shots are not 100 percent protective. It's usually about 40 percent lower.

Health officials say flu season is generally top of mind in North America in October and peaks from December to March.

After getting a shot your body needs about two weeks to develop protections intended by the shot.

A wide range of views from doctors have been heard across the country about the benefits of wearing a mask this year to combat the coronavirus and the flu. It's still to be seen what the resulting numbers will be.

Santa Barbara County Public Health Officer Dr. Henning Ansorg has told county supervisors the coronavirus is not to be viewed like the seasonal flu for many reasons, including the fact there is no vaccine. 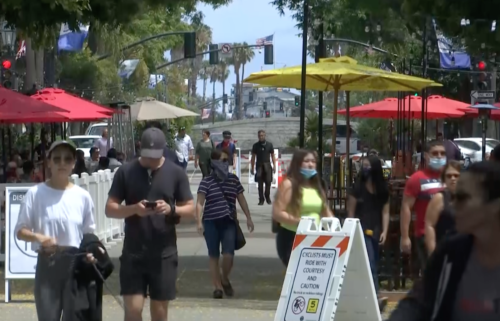