As Tropical Depression Nicholas ambles across Texas, Houston residents are being asked to stay home Tuesday night and people in Louisiana, including some still trying to recover from Hurricane Ida, are being told to prepare for a lot of rain.

Though Nicholas doesn’t pack the high winds Ida did when it made US landfall on August 29, it is a slow-moving rainmaker that could dump up to 20 inches of precipitation over the next few days.

“Power outages mean some streetlights and traffic signals remain out and downed power lines may be on the road and hard to see in the dark,” officials said in a news release.

More than 6 inches of rain has fallen in downtown Houston since Sunday, the National Weather Service said on its website. In the city of Deer Park, almost 10 inches of rain came down.

In Louisiana, forecasters predicted some areas will see 2 to 3 inches in an hour on Wednesday.

The storm will pull significant moisture in from the Gulf of Mexico into Thursday, according to CNN Meteorologist Taylor Ward.

Rainfall totals of 5 to 10 inches — and in some places up to 20 inches — are likely through early Friday in places from Louisiana to the Florida Panhandle.

“Life-threatening flash flooding impacts, especially in urban areas, are possible across these regions,” the National Hurricane Center said in its 7:00 p.m. CT advisory.

With its slow movement and heavy rain, Nicholas bears some resemblance to Hurricane Harvey, the Category 4 storm in August 2017 that stalled over the Houston region and dumped 30 to 40 inches of rain over several days. The flooding that ensued claimed the lives of 68 people — the highest hurricane death toll in the state since 1919.

More than 6.2 million people are under flash flood watches that extend from Texas to the Florida Panhandle. More than 700,000 of those people are in the New Orleans area, according to the National Weather Service.

The center of the storm, which made landfall as a Category 1 hurricane early Tuesday, slowed and is expected to stall in Louisiana where it will dissipate.

Louisiana Gov. John Bel Edwards said the storm is expected to drop some of its heaviest rain in areas impacted by Hurricane Ida.

“I suspect that there will be some of these homes and businesses that have begun to receive power again after Hurricane Ida, they may lose it because of Nicholas, because all of those electric companies have yet to restore the full redundancy and resiliency of their systems,” the governor warned in a news conference Tuesday afternoon.

Power was still out for about 74,000 customers late Tuesday, and Nicholas could sap critical recovery resources and further damage the state’s vulnerable infrastructure.

As of 11 p.m. Tuesday, about 129,000 customers were without power in Texas, according to PowerOutage.us.

Among them was Bart Stanley, whose family has owned Stanley’s General Store in Matagorda, Texas, since 1964. The storm also ripped the canopy off the gas station part of the store, causing the worst damage he’s seen in all that time.

Stanley didn’t know the extent of damage nearby, but he heard from customers that apart from downed trees and lack of power, homes seem to still be intact, he told CNN.

“I came down here to get our store open so that people could get coffee and gas and whatever else they need because there’s no place else for like 30 miles away,” he said.

In Surfside Beach, Texas, south of Houston, one resident described how the water was a hip height. “It was kind of scary, because we usually leave,” Patricia Tawater said told CNN affiliate KHOU.

Surfside Beach police chief Robert Wood told the station the department took no calls for EMS. “You know, other than the flooding and the dismay, it’s not near as bad as it could be,” he said.

But with no utilities, Surfside Beach is closed to visitors for now.

More than 340 flights into or out of Houston’s William P. Hobby and George Bush Intercontinental airports were canceled Tuesday, according to the flight-tracking website FlightAware. All Port Houston terminals were closed Tuesday but would return Wednesday to a normal schedule, according to its official Twitter account.

In Shauntell Baughman’s home in LaPlace, Louisiana, just outside New Orleans, rain was coming in holes left by Hurricane Ida, according to CNN affiliate WVUE.

“I’m in so much shock right now because I’m scared. We have been through so much hell,” Baughman told WVUE.

She said she had applied for a blue tarp, but hasn’t received one.

“It’s very dangerous, and it’s very scary, and if another storm hits this house, it is not gonna make it,” she said.

Ahead of the storm, the Louisiana National Guard staged 80 high water vehicles, 23 boats and 15 aircraft across the southwest and into central parts of the state, Edwards said Monday. 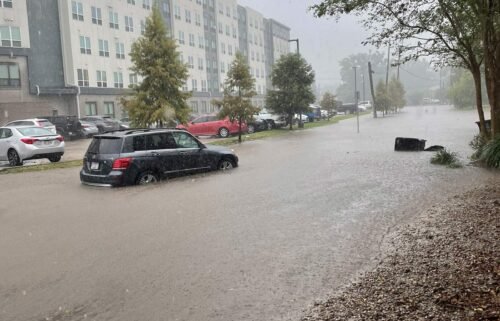 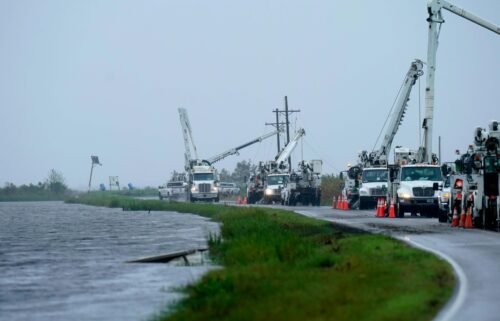 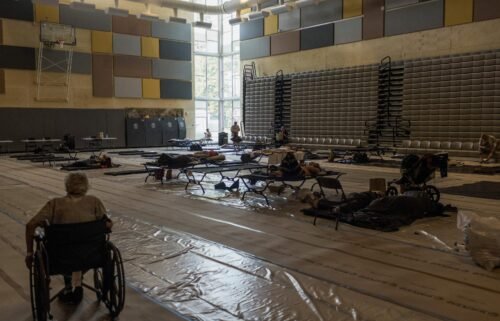