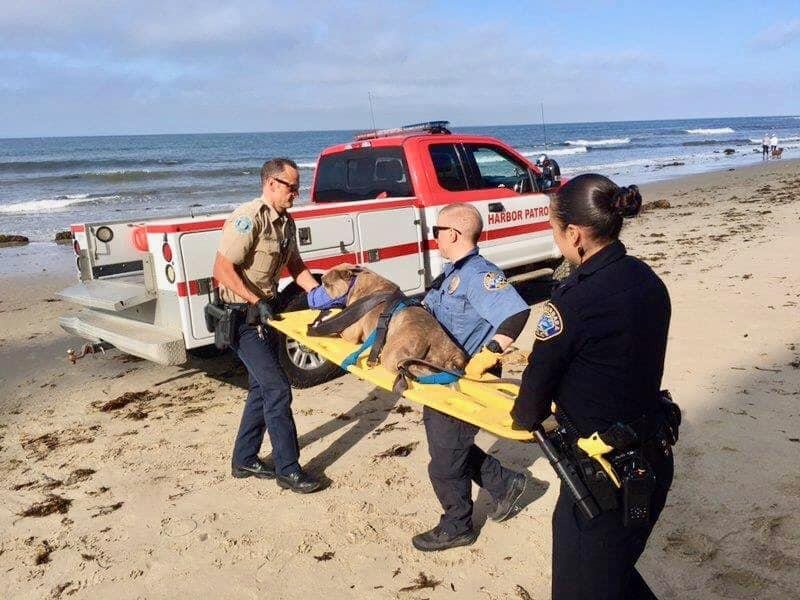 SANTA BARBARA, Calif. -- A dog that was found near death is now the unofficial mascot of the Santa Barbara Police Department.

Santa Barbara Police Department made the announcement Thursday afternoon that a fallen dog they rescued back in July is now the unofficial mascot for their department.

The dog, now named Lucas, was found on July 4 after a Good Samaritan called the police department to report a lifeless dog on the sand under a 70-foot cliff near the shoreline.

When emergency personnel made contact with the dog, they found him near-lifeless with a faint pulse.

After the successful surgery, officials say that Lucas was on the mend but still needed several weeks of therapy and recuperative care, including physical therapy, medication to control his pain and prevent infections as well as numerous follow-up vet appointments.

The investigation found that Lucas had fallen 70 feet from the cliff top then laid motionless in the sand for a full six hors before being discovered by the Good Samaritans as they passed by.

He was not microchipped and was not wearing an identification tag.

None of the involved groups were able to locate an owner.

Santa Barbara County Animal Services monitored his care and continued to work with K-9 PALS and DAWG to prepare Lucas for eventual adoption.

The police department say that Lucas quickly captured the hearts of the men and women of the Santa Barbara Police Department along with everyone involved in his care making him the unofficial mascot of the department.

SBCAS is working in conjunction with Dog Adoption & welfare group to find Lucas a permanent home.

Lucas is currently in a foster home.