One New York police officer is dead and another is in critical condition after a suspect in a domestic disturbance opened fire Friday evening inside a Harlem apartment, authorities said.

Police identified the slain officer as Jason Rivera, and the New York Police Department (NYPD) said on Twitter it was mourning “the loss of a hero officer — a son, husband, and friend.”

“Only 22 years old, Police Officer Jason Rivera was murdered in the line of duty,” the NYPD said.

The wounded officer was identified by police as 27-year-old Wilbert Mora, and police said he had undergone surgery. Asked for an update in a news conference Saturday, Mayor Eric Adams said Mora was “still fighting for his life.”

“At this moment it’s about prayers. We need New Yorkers to pray for the well-being of this officer that we should all be proud of,” Adams said.

Rivera and Mora are the fourth and fifth New York Police Department officers to be shot in the city this month, according to officials. Friday night’s incident was the first in which an officer was killed.

The incident unfolded as officers were responding to a domestic call at 6:15 p.m. in Harlem, officials said. A woman called 911 and reported she was having a dispute with one of her sons inside her apartment, NYPD Chief of Detectives James Essig said in a news conference late Friday at Harlem Hospital.

Shortly after, three NYPD officers arrived at the apartment and met the mother and another son. They both directed two of the officers to a room in the back of the apartment, where her other son — the suspect — was waiting, Essig said.

“The door swings open and numerous shots are fired, striking both officers — one fatally and one is here at Harlem Hospital in critical condition,” Essig said.

The third officer shot the suspect, identified as Lashawn McNeil, in the arm and head when he tried to escape, police said. McNeil, 47, was in critical condition at the hospital, officials said.

Previously, a law enforcement source told CNN a civilian believed to be involved in the incident had died, but that was not the case.

The three officers who responded Friday night were wearing body cameras, a source with knowledge of the investigation told CNN Saturday. The NYPD has collected the videos and is analyzing footage from each officer’s body camera, the source said.

Investigators are also sifting through the suspect’s social media accounts as part of the investigation, the source said.

Last year saw the highest number of law enforcement officers who were intentionally killed in the line of duty since the terrorist attacks of Sept. 11, 2001.

There were 73 officers who died in felonious killings in the line of duty in 2021, according to preliminary year-end data provided to CNN by the FBI. It was the highest total recorded by the agency since 1995, excluding the 9/11 attacks.

The FBI reported that 55 officers were killed by gunfire in 2021 through the end of November, up from 39 in the same time frame in both 2020 and 2019, according to the preliminary data.

Shooting is an attack on the city, mayor says

Adams, who ordered flags on city buildings be flown at half staff, characterized the shooting Friday night as an attack not just against officers, but the entire city, its children and families.

He echoed those comments Saturday, telling reporters, “This is a battle between the killers and New Yorkers, and we are not going to lose that battle.”

When Adams, a former police captain, was inaugurated January 1, he emphasized he would not let New York become “a city of disorder.” But his tenure has been marked by a series of high-visibility incidents that have spotlighted the complex challenge of crime in the city.

Though not near the rate of the early 1990s, it has been on the rise in recent months. In November — the most recent month for which the city has released data — the crime rate increased by 21.3% from the same period last year, according to the NYPD.

During the Democratic primary campaign, public safety became a top issue among candidates, and Adams argued he was uniquely qualified to confront it, given his service of more than 20 years with the NYPD.

“Mission one is to deal with the gun violence in our city,” he said at his inauguration. “You don’t start bringing in the new year with bringing in violence; it’s unacceptable.”

In addition to the police shootings, the mayor has had to confront other violent attacks this month, including a seriously injured 11-month-old who was shot in the face when caught in a crossfire on Wednesday in the Bronx, and the death of a 40-year-old woman who was pushed in front of an oncoming subway train on January 15 at the Times Square station.

Police said the subway incident was a random attack. The suspect was charged with second-degree murder after he turned himself in to police less than an hour later.

One of Adams’ key hires was Police Commissioner Keechant Sewell, who was previously the chief of detectives in Nassau County on Long Island. On Friday night, she said the Harlem tragedy was “beyond comprehension.”

“Please pray for our officer that lies in his hospital bed fighting for his life,” Sewell said. “And every single day appreciate the valor and sacrifice of the men and women of the NYPD.”

Gun used in shooting was stolen in 2017

The firearm used in the shooting was a Glock 45 with a high-capacity magazine that holds up to 40 additional rounds, police said.

It was stolen from Baltimore in 2017, and the NYPD said it is working with the Joint Firearms Task Force and the Bureau of Alcohol, Tobacco, Firearms and Explosives (ATF) to further trace the gun.

Federal authorities investigating the gun’s history and how it got into the suspect’s hands have so far managed to trace the weapon back to where it was originally sold, according to a law enforcement official with knowledge of the case. The same official said the original gun dealer went to his store at midnight to dig up purchase records after being contacted by the ATF.

The source told CNN that with the additional capacity, the gun could hold anywhere from 50 to 100 rounds. It’s still unknown how many rounds were stored and how many were fired, the official said.

The ATF is seeing an increase in the number of guns used in a crime in New York that were traced to an out-of-state purchase that occurred less than a year prior to that crime, according to the official.

“Let me be clear. There are no gun manufacturers in New York City. We don’t make guns here,” Adams said Friday night. “How are we removing thousands of guns off the street and they still find a way into New York City in the hands of people who are killers?”

Adams called for assistance from the federal government to help address the problem, saying Friday, “We need Washington to join us and act now to stop the flow of guns in New York City and cities like New York.”

The mayor reiterated those comments Saturday, adding his administration would begin introducing initiatives next week to “zero in on those small number of people who are creating a large number of shootings.”

In the meantime, Adams said officers will continue their efforts “on the ground.” The mayor is imploring residents, “Don’t surrender to violence. Violence will surrender to us.”

President Joe Biden tweeted about the two officers on Saturday, saying he and the first lady were “keeping them and their families in our prayers.”

“Officers put on the badge and head into harm’s way every day,” the president said. “We’re grateful to them and their families for their extraordinary sacrifice.”

Attorney General Merrick Garland offered condolences to Sewell and told her the Justice Department and FBI were ready to assist, according to a tweet. The FBI was already in touch with their counterparts at the NYPD, he added.

“It has to stop,” the New York FBI office said via Twitter on Saturday, referring to the shootings of police officers. “All of our hero officers deserve to come home, always.”

New York Gov. Kathy Hochul, in a tweet, called gun violence a crisis in the state, and pledged to work with Adams and others “to take meaningful actions to make New Yorkers safer.”

New York Attorney General Letitia James released a statement in response to the shooting, saying the entire state is mourning.

“As we await the facts, my office may assert jurisdiction in this matter. We pray for the safety of our police and our communities,” James said. 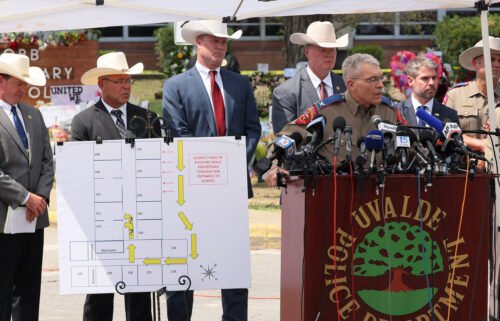 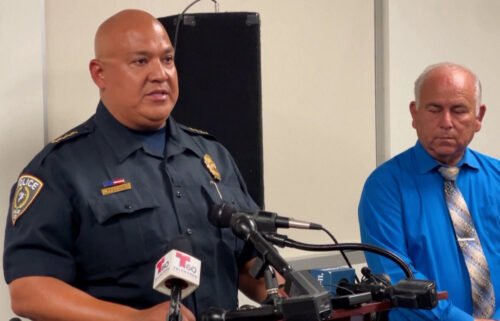