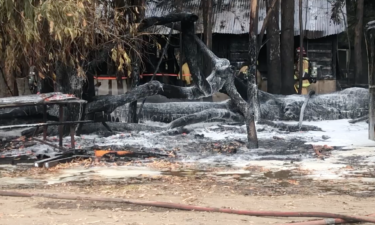 SANTA BARBARA, Calif. - Santa Barbara police arrested a ski-masked man Wednesday night after he was reportedly seen attempting to break into a jewelry store from the roof.

Officers said they received a call from a concerned community member around 10:40 p.m. reporting a suspicious person on the roof of a jewelry store on the 600 block of North Milpas Street.

The caller said the person was dressed in all black and was wearing a black ski-type mask. They said they could see the person using power tools to cut into the rooftop.

Multiple officers were dispatched to the area to help set up a perimeter in case the suspected burglar tried to run away. The Santa Barbara County Sheriff's Office also sent a K-9 Unit to assist.

Police said the burglary suspect was on a large rooftop that conjoins with several other businesses on the same block.

Officers said the man noticed the police presence in the area and started running back and forth on the large roof in an attempt to flee.

During this time, the man was able to access a large rooftop air vent that was connected to another local business. However, officers climbed onto the roof and, after a short foot pursuit, apprehended the man.

Police said they found multiple burglary tools in the area that had been used by the man.

Detectives were also called to investigate this case and said that the 37-year-old Santa Barbara man may be connected to other similar burglaries within the city.

The man was booked at the Santa Barbara County Jail for attempted burglary, looting/theft during a state of emergency, vandalism, resisting arrest, providing a false name and possession of burglary tools. His bail was set at $500,000.