CAMARILLO, Calif. - Two men were arrested in Camarillo after being caught on surveillance footage installing credit card skimmers into gas pumps at the Adolfo Gas Station on Adolfo Road.

The incident occurred around 11:25 p.m. on Wednesday.

Camarillo Patrol deputies were dispatched to the scene after the men were caught tampering with the gas pumps on video surveillance.

When they arrived, deputies said they saw the two individuals still working on one of the gas pumps. When the deputies tried to contact them, the men fled the area on foot.

Deputies said they established a perimeter, but eventually located the men hiding in some nearby bushes. They were then arrested without incident.

The men were associated with a black pickup truck that was parked at the gas station. Deputies searched the pickup truck and located more skimmers, some gift cards, bolt cutters, drills, locks, keys and other tools consistent with skimmer installation and removal.

Sosa-Tamayo and Leyva-Tamayo were both booked into the Ventura County Pre-Trial Detention Facility on charges of computer access and fraud, fraudulent use of a card scanning device, attempted identity theft, conspiring to commit a crime, possession of burglary tools, vandalism and resisting arrest.

The Camarillo Police Department would like to remind the public to always check for signs of tampering when using a remote pay device or ATM:

The Camarillo Police Department would like the community to know that they have an anti 'skimmer' program in place and regularly check credit card devices throughout the city. If you notice something strange about a device you are using, contact Camarillo police immediately at 654-9511. 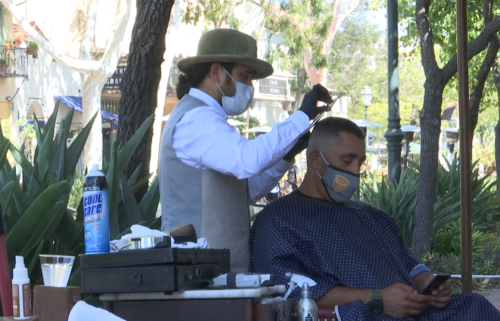