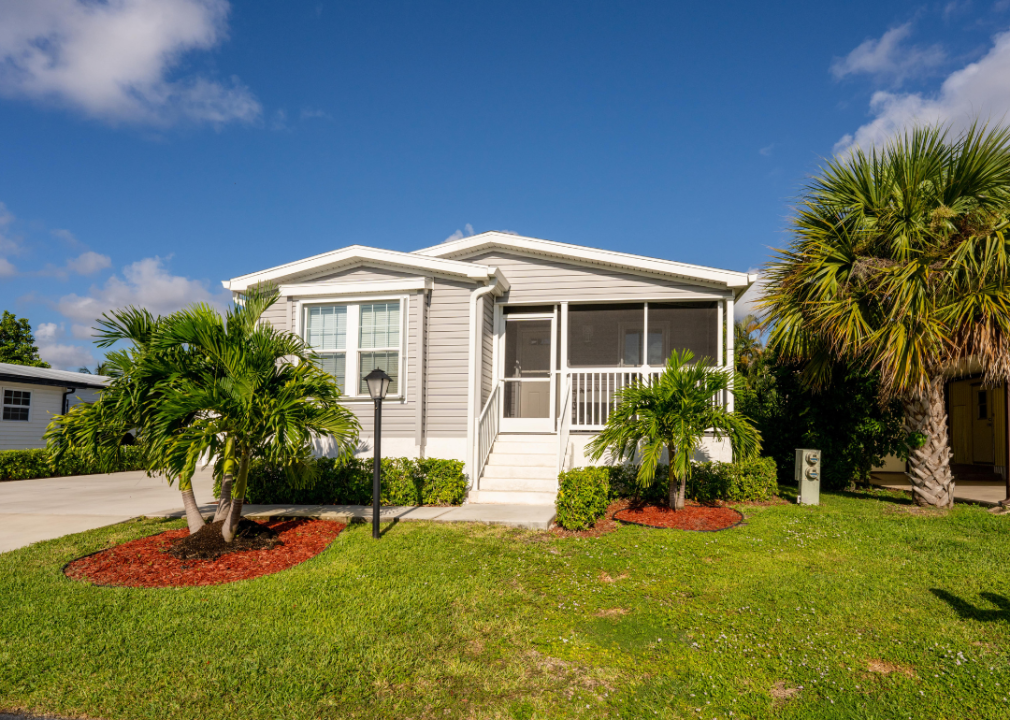 Manufactured home sales are skyrocketing—here’s why

The last few years of ultra-competitive, low-inventory housing markets have pushed more Americans to buy small—and have spurred an uptick in the popularity of manufactured homes. In fact, manufactured housing hasn’t been this popular since 2006.

A manufactured home is a compact house small enough to be made in a factory. They can range from 500-2,000 square feet and tend to include all the typical home amenities found in a single-family home.

Americans lost interest in this more compact form of housing in the early 2000s when lenders were hyping subprime mortgages to single-family home buyers—a practice that ultimately triggered a housing market collapse. Through much of the 2010s, sales of manufactured homes remained low; however, in 2018, Bloomberg declared that manufactured housing was making a comeback.

Stacker examined data from the U.S. Census’ Manufactured Housing Survey to see how manufactured home prices and shipments have changed over the last eight years. In just five years since Bloomberg’s declaration, these types of homes have increased in price faster than single-family homes, as more and more Americans seek affordable housing options.

Manufactured homes are the country’s largest source of affordable, unsubsidized housing; however, rising prices and increasing investor activity are pricing many buyers out. It is also more difficult and costly to get a mortgage for a manufactured home than for a single-family home, according to research by the Consumer Financial Protection Bureau.

After a boom in popularity during the 1960s and 1970s, the U.S. passed laws regulating how mobile homes were built and also bestowed the home type with its new name, which carried with it less of a connection to Hollywood depictions of trailer parks. The regulated industry of manufactured housing was born.

The standards for building a manufactured home today are comparable to those for building single-family homes. Some even argue these homes are built for more wear and tear than their single-family counterparts, given that they have to be sturdy enough to transport on highways either in pieces or in their entirety. They are generally 8 feet or more in width and 40 feet or more in length while in transit. 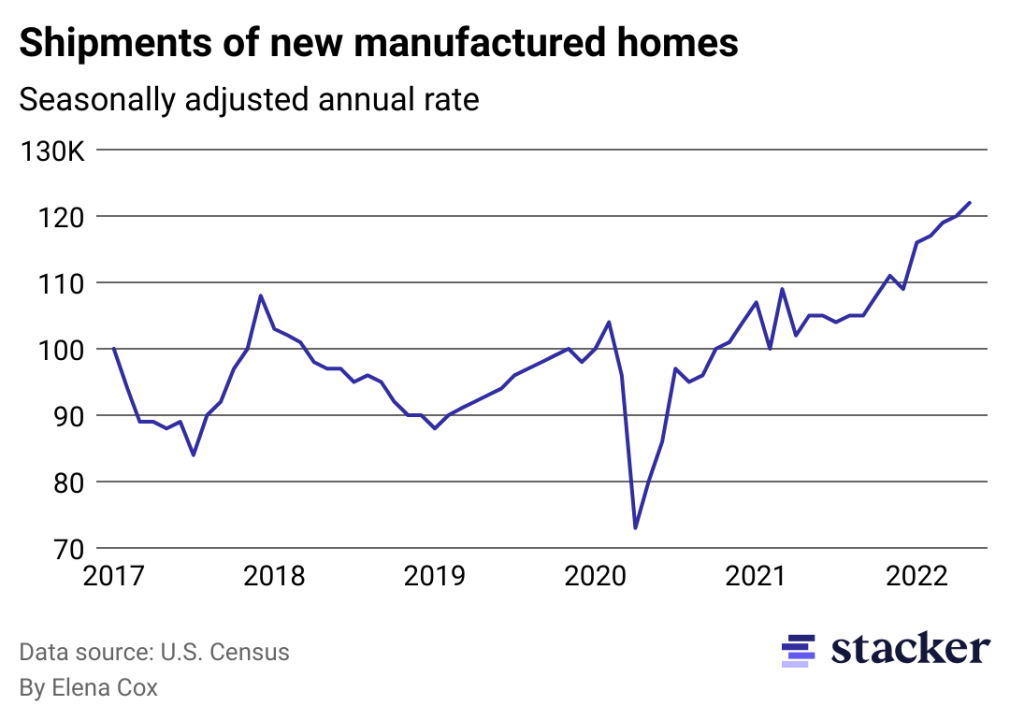 At the turn of the 21st century, Americans were buying fewer and fewer manufactured homes—until around 2013. That’s when annual shipments began ticking upward again, according to the U.S. Census Bureau. Shipments of manufactured homes represent how many individual homes are built and delivered to buyers. 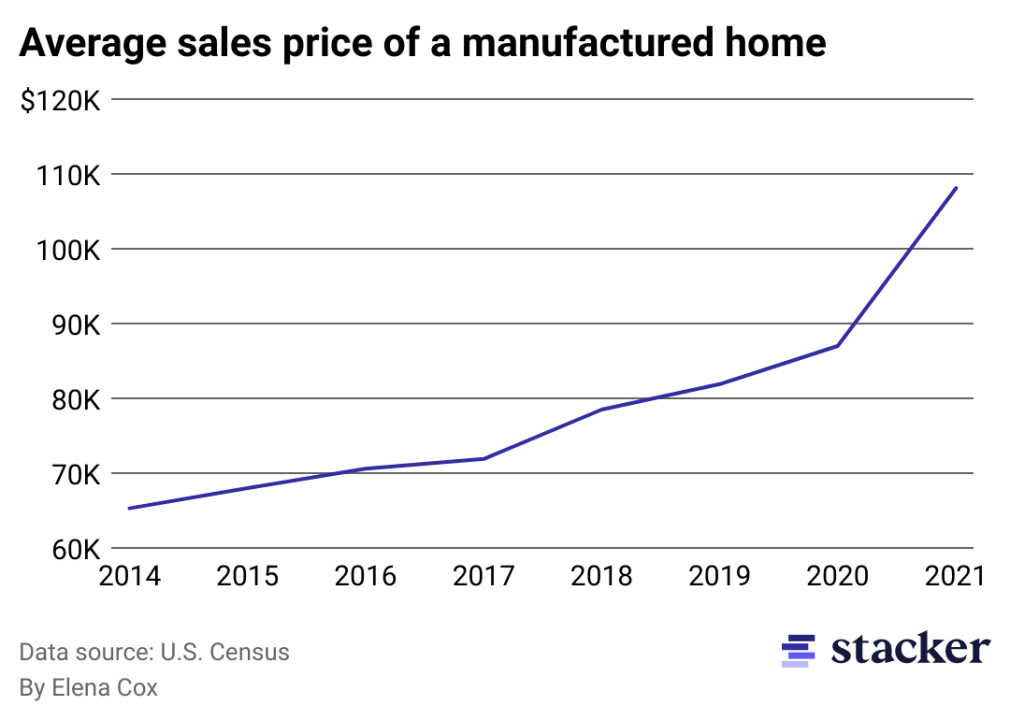 Prices of new, manufactured homes have spiked since 2014 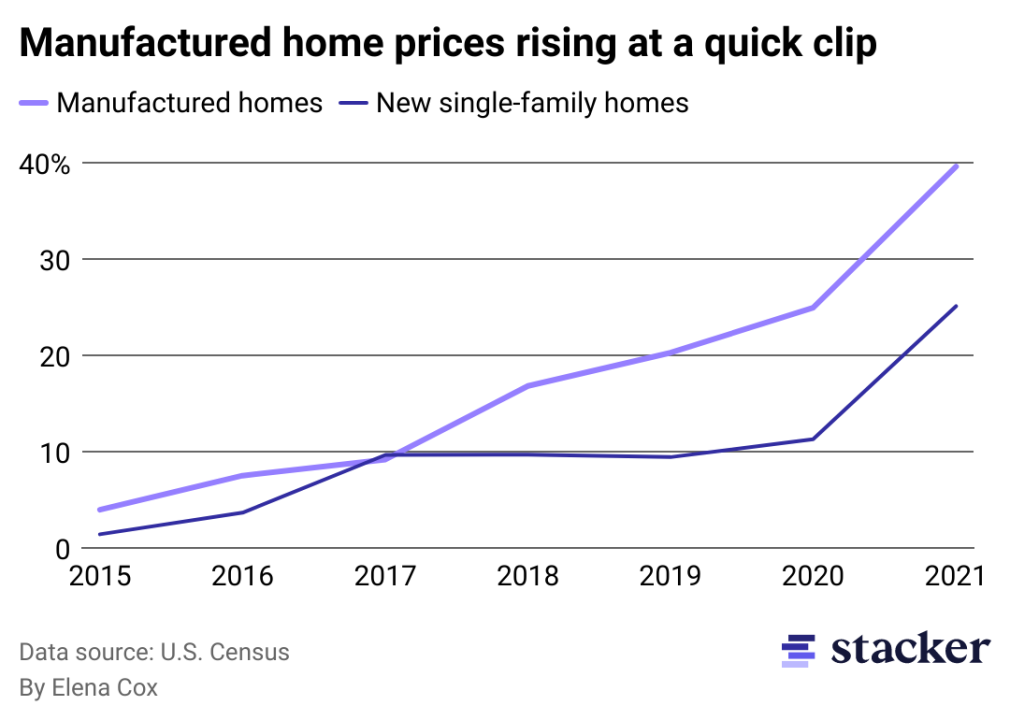 Manufactured housing is becoming more expensive at a faster rate than single-family homes. This was especially true from 2020-2021. Some of the spike in costs during this period can be attributed to supply chain hiccups amid the COVID-19 pandemic and higher costs for materials like lumber. But manufactured home prices had been increasing faster than single-family home prices even before the pandemic began—and at least as far back as 2017. 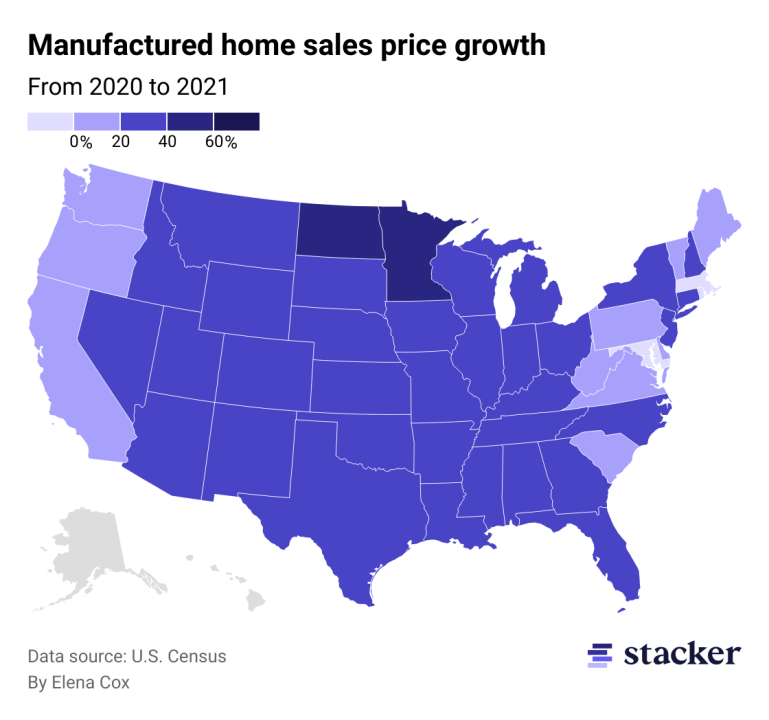 States where manufactured home prices have grown the most

The cost of purchasing a manufactured home in the U.S. jumped the most in North Dakota and Minnesota, which respectively saw a 49% and 46% rise in prices.

North Dakota Manufactured Housing Association Director Kent French said the trend of Americans moving to more rural regions of the country as employers embrace remote work has been a boon for the industry.

“To get a carpenter to go out and build your house is almost non-existent in the rural areas,” French said. But anyone can plop down a pre-built manufactured home on a remote plot of land—if they can afford it.

Consolidation among businesses that produce manufactured housing means that prices can swing more dramatically from month to month compared with single-family homes. That’s according to French, who told Stacker that prices have been coming down in his state in recent months as lumber and other goods become cheaper.

The average sales price of these homes decreased from 2020-2021 in three states: Maryland, Massachusetts, and Rhode Island. 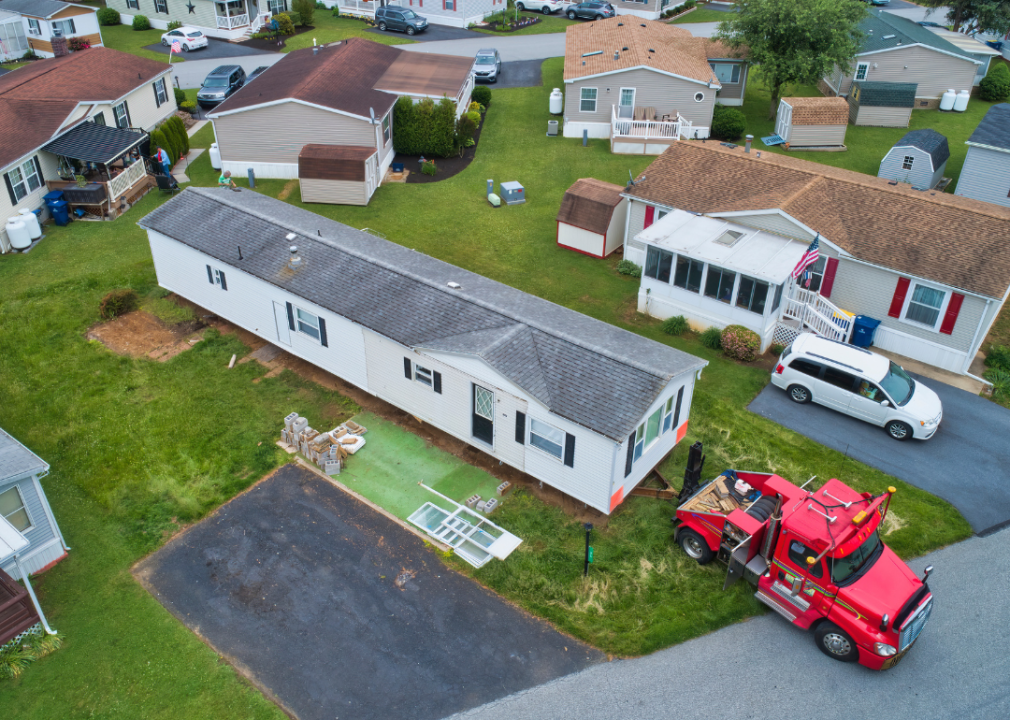 Lot rent prices are shooting up across the country

A manufactured, mobile, prefab home being removed from a lot in a park

It’s not just manufactured home prices that are going up—the cost of renting the lot a manufactured home sits on has been increasing as well. Midwestern states saw the largest increases in manufactured housing tenant occupancy, according to data from Northmarq. The average rent for a lot increased 4.4% nationwide in 2021.

But corporate landlords have also been expanding their manufactured housing portfolios recently, pushing up rents and displacing some residents. The largest operator of manufactured home communities in the U.S. is Equity LifeStyle Properties, a real estate investment trust (REIT) that owns around 140,000 lots across 446 properties. 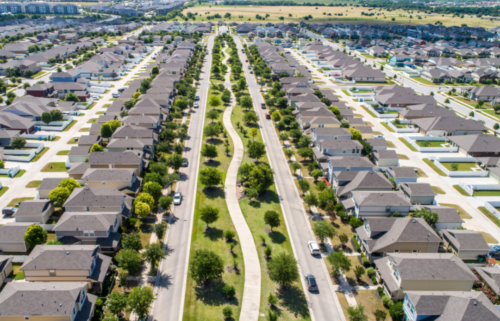 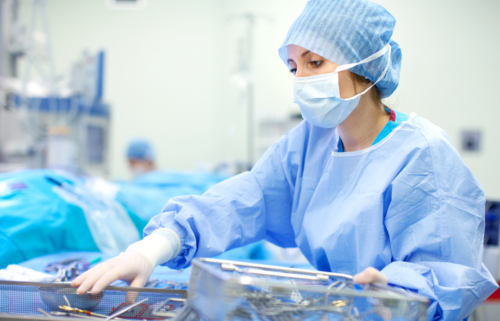 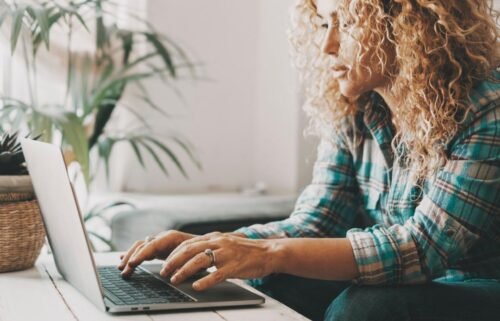 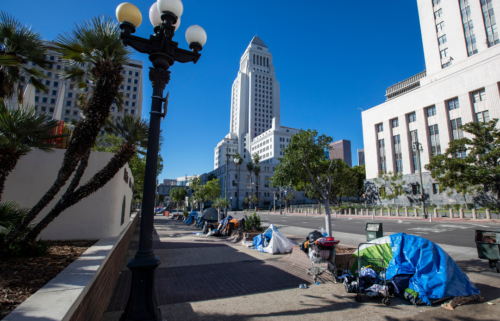