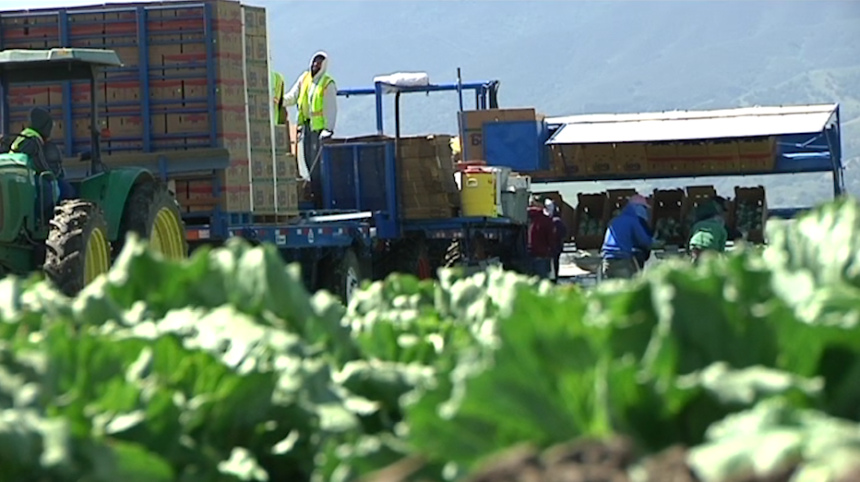 NIPOMO, Calif. --Immigrant rights supporters are hoping a bipartisan legislation will be approved by the Senate this year. The Farm Workforce Modernization Act would help undocumented farm workers adjust their status.

The proposal aims to address labor shortage in the agriculture industry. It wouldn't give undocumented farm workers an automatic ticket to citizenship, but some say it rewards people who broke the law.

During a forum about the bill on Tuesday, Congressman Salud Carbajal, who sponsored it, said he was optimistic the bipartisan legislation would be approved by the Senate this year.

Qualifying ag workers would be able to apply to 5-year renewable visas. Those who meet certain criteria would be eligible for a green card down the line and eventually citizenship. The bill dedicates an extra 40 thousand green cards a year.

The measure also promises to streamline the H2-A visa program, a system that allows farmers to recruit foreign employees for temporary positions. The proposal also allows certain H-2A visa farmworkers to apply for permanent residency after working 10 years in the United States.

"The bill still prioritizes American workers and American labor protections first, and allows this next step of applying for permanent residency only if there are no American workers available to fill those jobs and if the person applying is able to work an annual (not seasonal) job," a spokeswoman for Salud Carbajal's office explained.

The bill would also establish a mandatory E-Verify system for the ag industry nationwide to ensure workers have the proper documentation.

“Any type of legislation that's gonna help us improve our workforce is worth it," said Patricia Cantu, a farmer in Nipomo.

“At least in Santa Maria, there's around 50,000 people working the fields, Mexican nationals," said the council of Mexico in Oxnard, Euclides del Moral.

"I'm sad, I'm sometimes nervous, tense. I think we all have that problem," one immigrant farm worker said during the forum, echoing others' frustrations about immigration roadblocks in the U.S.

“It is a much, long awaited proposal to reform some part of immigration that is needed, especially in areas like Santa Barbara County,” said Del Moral.

Supporters of the proposal say it will help undocumented farm workers come out of the shadows.

“Any way that we can get legal workers that aren't gonna be scared to come out and work, I think that's the most important thing that we need," said Cantu. "Our employees self deport, some of them have been deported.”

At previous meetings hosted by congressman Carbajal, Central Coast farmers and ranchers have said the proposal was a step in the right direction.

Others, like the American Farm Bureau, oppose the bipartisan bill, saying it doesn't provide a long term solution.

"Farmers need meaningful reform that addresses the concerns of both workers and growers," the Bureau said in a statement when the legislation was approved by Congress in December 2019.

While 34 GOP members supported the proposal, a spokesman for the Santa Barbara County Republican Party has also raised concerns about the Farm Workforce Modernization Act in the past.

“This complex bill does provide some needed reforms by providing labor for growers," Greg Gandrud said. "However, it also forgives and rewards social security fraud with a path to citizenship.”

House minority leader and Bakersfield congressman Kevin McCarthy has echoed these concerns before, too.

"We are a nation of laws, and those laws must be upheld – providing illegal immigrants a pathway to citizenship without any penalty is a non-starter," he said in a statement in December.

Congressman Carbajal said if it is rejected by the Senate this year, sponsors of the bill are prepared to reintroduce it at the next congressional session in 2021.

The California Farm Bureau, Dairy Farmers of America and a number of California grower industries are supportive of the legislation.