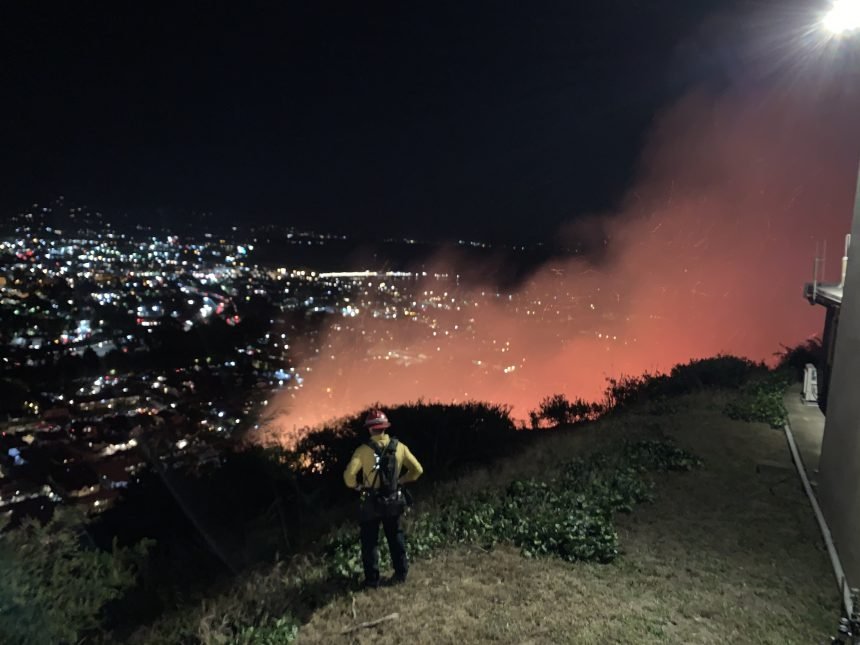 Firefighters will continue to patrol the area through Tuesday evening.

Crews are expected to remain on scene until Monday morning, when 100% containment is expected.

City Fire said Loma Alta Drive will remain closed through Monday due to rolling debris and Fire department equipment on the roadway. No other roads are closed at this time.

Drone video capturing the extent of the burn scar on TV Hill can be viewed on Facebook here.

Crews will remain on scene for the rest of the day and overnight into Sunday to finish containing the fire.

City Fire said residents may see some small flare-ups during wind or overnight, but there is no need to worry as crews are at the scene.

Loma Alta Drive is the only street still closed at this time. Crews expect it will remain closed until Monday afternoon.

UPDATE 5/21/21: As of 5 p.m., the Loma Fire is 80% contained and has burned between 8 and 9 acres of hillside. Three hand crews remain on scene including two from Santa Barbara County and one from Cal Fire. They will continue monitoring the fire during high winds.

City Fire would like to reassure the community that these winds may cause flare-ups as the fire is not fully extinguished yet, however, crews are working to keep those flare-ups within the contained area. Flare-ups do not necessarily mean the fire is spreading or has re-ignited.

All evacuations were lifted early Friday morning. By 10 a.m. on Friday, the fire had burned about 7 acres and was more than 70% contained, according to GPS tracking done by Santa Barbara County Fire. Two homes have suffered damage. No injuries have been reported

#Loma Fire- UPDATE- As daylight begins, FF’s continue to mop up hot spots and secure containment. Loma IC reports with GPS mapping, revised acreage has been revised to under 10 acres. Two homes were damaged, none destroyed. No injuries reported. Cause under investigation. pic.twitter.com/ldIJSfdkWb

One arrest has been made in connection to the fire. 23-year-old Victor Hernandez of Santa Barbara was found by fire investigators hiding in the area early Friday morning. After further investigation, he was arrested for arson of an inhabited dwelling, five counts of general arson, being under the influence of a controlled substance and being in possession of narcotics.

A Montecito Fire Department truck pulled up on the NewsChannel 3-12 back patio around 6 a.m. Friday to help douse the a flare-up with water. Hand crews from Santa Barbara County and CALFIRE are now working in the steep and rugged terrain with chainsaws and axes to chop up potential fuel and create a path to smoldering areas.

SANTA BARBARA, Calif. - A wind-driven fire broke out on TV Hill Thursday evening, prompting evacuations at the KEYT newsroom and in surrounding neighborhoods.

A NewsChannel crew saw someone being taken into custody directly below Loma Alta Drive. Arson investigators were also seen in an area that is believed to be a homeless encampment. Our newsroom reached out to police, but they did not comment.

The Loma Fire broke out just before 9 p.m. Thursday.

View of fire on TV Hill. Our @KEYTNC3 news team has been ordered to evacuate station. pic.twitter.com/qqAJyBIL90

As of 10 p.m. the fire had grown to 20 acres with a rapid rate of spread, according to firefighters.

Roughly 50 homes and other structures were threatened, and firefighters said at least one home was damaged.

Firefighters said the fire was 50 percent contained as of 1:40 a.m. Friday and the situation had calmed down dramatically from earlier in the night.

Forward progress on the fire was stopped and evacuations were lifted around 12:30 a.m. Friday.

Video and photos taken right after the fire broke out showed intense flames burning up the hill just below KEYT's Santa Barbara newsroom.

Santa Barbara police lifted evacuations so that residents could return to their homes early Friday morning.

-UPDATE- Evacuation order has been LIFTED. Community Members can now return to their homes.

Evacuations were initially ordered in a box from Loma Alta Drive in the east to Miramonte Drive in the west and from Vista Del Pueblo in the north to Cliff Drive in the south.

The Red Cross set up a station at the Leadbetter Beach parking lot for those who were forced to evacuate from their homes.

Firefighters said a lot of people were stopping to look at the fire. Crews were asking the public to please avoid the area unless absolutely necessary so crews could bring in firefighting equipment and move around safely.

Fire on TV Hill in Santa Barbara. Things have improved with fire crews getting water on the flames now. The terrain is steep and the wind is howling. pic.twitter.com/PwvQnf11XU

A fire department spokesman said firefighters stopped a fire that spread to a large home off Via del Cielo, but there was some damage to the home.

Firefighters from throughout Santa Barbara County and some from Ventura County responded.

Roughly 17 engine companies were on scene, along with hand crews.

Members of the KEYT news team were able to safely evacuate and spoke with neighbors who had also been evacuated.

"I was watching the television and all of a sudden ashes are flying up in the air. They were sweeping up TV Hill's side kind of away from the TV station and right at where I was sitting and then the wind, really really bad, kind of swept it up to the edge of the house which I've always tried to make a fire break there. It kind of swept towards the back of my house and the neighbor's house and they're still working on it, so I don't know what the result of it is," said Steve Belling who lives in the area where the fire was burning.

Winds were a major concern across the Central and South Coast Thursday. A Wind Advisory over the Central Coast was set to expire at 9 p.m. while a Wind Advisory was to remain in effect across the southern Santa Barbara coastal and mountain areas until Friday morning. The First Alert Weather Team forecasted north to northwest winds would range between 25 to 35 miles per hour, with gusts up to 50 miles per hour. The strongest winds were expected between Gaviota and Refugio, as well as the hills above Montecito.

The Santa Barbara County Fire Department said winds were a major factor at the beginning of the fire. Spokesman Mike Eliason said there were two main issues with the fire: it was burning up a steep hillside and gusty winds were pushing it.

Eliason said embers were a major concern because they can travel for miles in the wind and cause spot fires in other areas.

Firefighters were battling the flames in rough and steep terrain, making it a difficult and dangerous fight.

Eliason said the concern in the dark overnight hours was that debris on the hillside could fall on crews below without warning.

Crews were expected to be out all night and into the next day monitoring for hot spots and putting out embers.

Loma Alta Drive and West Canon Perdido Street are the only roads that will remain closed through Friday so that crews can safely access and continue fighting the fire. All roads are expected to be open Saturday.

The fire impacted traffic in the immediate area of the fire and also affected scheduled road work on Highway 101.

Caltrans tweeted late Thursday night that it had suspended overnight work near Ortega Street in Santa Barbara due to the Loma Fire. Construction and maintenance crews were expected to remove equipment before reopening two lanes of southbound Highway 101. 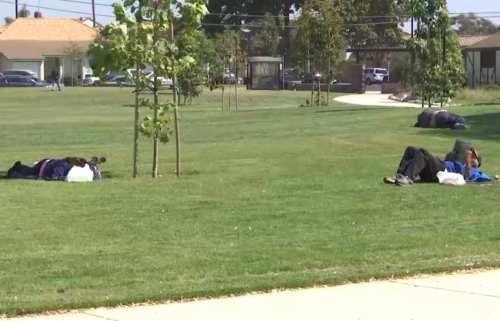