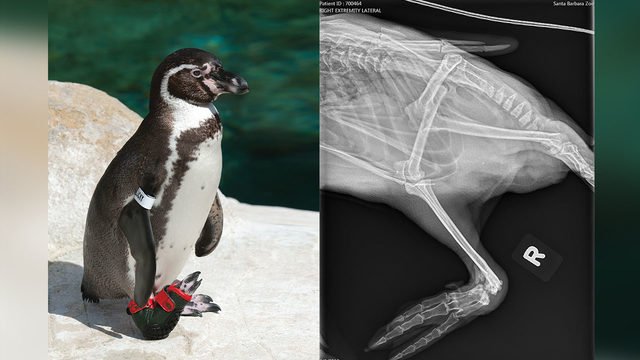 SANTA BARBARA, Calif. - Santa Barbara's most famous penguin has died. Lucky, who was born in 2010 and known for his custom footwear, was humanely euthanized according to zoo officials.

Born with a degenerative foot condition, Lucky became one of the zoo's most well-known residents thanks to a special shoe developed by Teva, one of the Deckers shoe brands headquartered in Goleta.

With his special shoe Lucky was able to live a mostly-normal life, learning to walk, swim and jump like the other Humboldt penguins in the zoo.

Unfortunately, over the years his condition worsened. In late 2018, Lucky's disfigured leg was amputated after his malformed ankle joint had significantly deteriorated and pain management and other treatments were no longer effective.

In recent weeks his health began to go downhill again and the zoo made the difficult decision to euthanize the penguin.

"Lucky defied the odds by living an incredibly full life. For ten years, he was supported by a dedicated team made up of the Zoo's own animal care staff, the incredibly generous team at Teva, and countless other veterinarians, specialists, and more – all of whom helped extend his life far beyond what it otherwise would have been," the Santa Barbara Zoo said on social media.

Lucky was sometimes taken to schools and businesses as part of educational demonstrations. He often made stops at the Deckers corporate headquarters to show off his footwear and meet the extended family of engineers and employees who helped him with his mobility.

“Lucky’s journey has taught us all so many valuable life lessons. He truly was a lucky penguin who overcame great physical adversity to live a great life here with us. He has been a part of the Zoo family for many years, and our staff and volunteers are grieving this significant loss.”