OXNARD, Calif. - Oxnard police were on the huntThursday for a suspect wanted for an attempted kidnapping.

The department received a report of an attempted kidnapping near the intersection of G Street and Teakwood Street on Wednesday around 2 p.m.

Arriving officers were able to speak to the 13-year-old female victim, according to police spokesman Paul Carganilla.

The young girl was walking home from school when the suspect pulled up to her in a black four-door sedan, Carganilla said.

The suspect and the girl talked briefly before she continued to walk away, he added.

The suspect then got out of his car, approached the girl, grabbed her wrist and yelled for her to get in his car, according to Carganilla.

A person driving by witnessed the incident and yelled for the suspect to leave her alone, to which the suspect got back in his car and fled the scene.

The girl made it home safely, Carganilla said.

The suspect was described as a white man with brown hair, a scar above his right eye, wearing a blue face covering, a black shirt, and black pants.

Additional detectives, traffic officers, school resource officers, and the neighborhood policing team were all out in the area Thursday afternoon looking for the suspect and his car.

Anyone with information regarding the incident is encouraged to call the Oxnard Police Department at 805-385-7600 or online via the department's website by clicking on "report suspicious activity." 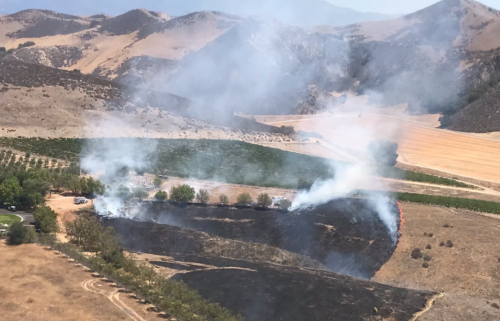