MONTECITO, Calif. - Six cars were involved in back-to-back collisions on Highway 101 in Montecito Sunday morning partly due to the rising sun.

California Highway Patrol said the first crash happened at 7:20 a.m. on the southbound side south of Sheffield Drive in a construction zone.

They said a gray Honda Pilot was traveling in the #1 lane at an unknown speed when it slowed suddenly. A gray Honda Accent was driving behind it at 65 miles per hour and was not able to stop in time, rear-ending the Pilot.

CHP said the details of the second crash are still under investigation, however, the majority of drivers in both crashes said the low, glaring sun was a factor.

After the crashes, both lanes of the highway were blocked. Crews said they were able to push the cars into one lane so that traffic could pass through the #2 lane. The #2 lane was open for access at 8:10 a.m.

Around 9:20 a.m., while crews were still waiting for tow trucks to clear the six cars, officers said they spotted a man driving in the #2 lane who was looking down at his phone rather than at the road.

The man was stopped by CHP who immediately noticed he showed symptoms of being impaired. The 32-year-old man from Nicaragua was ultimately arrested at the scene for driving under the influence.

CHP Officer Shannan Sams said it is important to pay close attention to the roadway when you are going through a crash scene because there are a lot of trucks, pedestrians and first responders in the area.

Both lanes of the freeway were fully cleared by about 10 a.m.

CHP said three drivers suffered minor injuries from the pileup, but none were transported to the hospital.

Officer Sams said you should always keep a safe distance away from the vehicle in front of you and watch your speeds on the freeway. If the sun is low, make sure you have sunglasses or a sun visor to help you see the roadway.

Alcohol and drugs were deemed not to have been involved in the six-car pileup.

This pileup happened while many drivers were on their way to Sunday's Montecito Motor Classic. Some attendees reported being late to the event due to traffic. 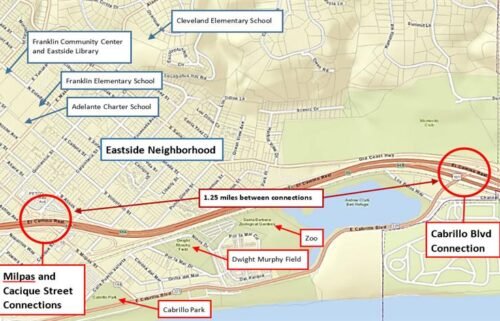