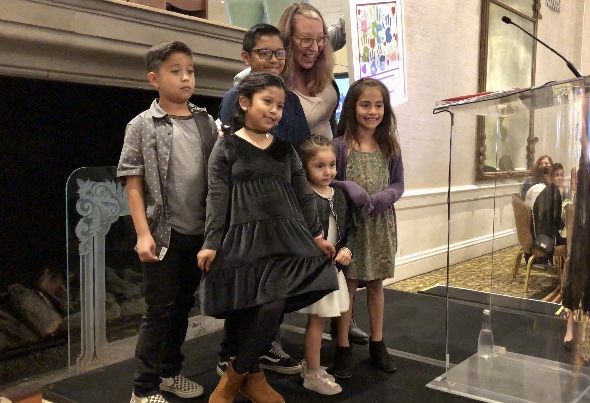 Snyder is the author of "No Visible Bruises: What We Don't Know About Domestic Violence Can Kill Us."

She complimented the nonprofit for having the word solutions in its name.

"There is no population that is free from domestic violence, doesn't matter if you are black, white, rich, poor, immigrants, citizens," said Snyder.

She shared a story from her book that showed how many agencies failed to protect a young mother and her children.

"If you are not standing at the receiving end of a punch, it doesn't mean that domestic violence doesn't affect you in some way. It intersects every social issue we face as a country: homelessness, education, certainly gender inequality, health care costs, taxpayers, there is all kinds of ways it intersects. I think that once we try to really take domestic violence seriously we will find there is a ripple effect on other issues that we are facing crucial issues." said Snyder.

Domestic Violence Solutions executive director said, " I want people to know that domestic violence is a huge social issue and even thought we live in a beautiful community it is an underlying, for lack of a better word, evil, that not only affects the victims and survivors but the whole community."

Although the audience included survivors, lawyers, prosecutors and elected officials, Snyder said she wished judges would come to events to hear how mass murders and other crimes are often linked to prior violence that happens behind closed doors.

Survivors spoke in a video about how domestic violence solutions made them realize they were not alone.

The luncheon raised $100,000 that will help them offer safe housing for survivors and answer thousands of hotline calls.

Snyder spent time with survivors and their children and signed her books after the program.

For more information about Domestic Violence Solutions, visit their website.