MONTECITO, Calif. - Two years of recovery in Montecito after a deadly mudflow disaster is revealing a community that found ways to rebound from a tragedy few had ever envisioned.

This week San Ysidro Creek is a complete turnaround from the explosive runoff that gushed through homes and took 23 lives on January 9, 2018. It was one of several areas that exploded with a violent response to an intense rain storm with a direct hit of steep, fire damaged slopes.

Many residents say they will never forget the images they saw and the impact on families, homes, businesses, cars, bridges and a one of a kind environment.

"It was intense but I definitely would say it made me stronger," said resident  Haley-Mariah McDonald.

It was like nothing else they had ever experienced.  A massive fire followed by a powerful rain storm on hills that aim towards a populated area.
Thousands of people fled their homes. Some stayed and some did not understand the evacuation guidelines.

" I was evacuated from my house in total from the fires and the mudslides probably a month and a half to two months," said McDonald.

On this  second anniversary, flowers have been brought back to areas like the Montecito Creek where many lives were lost in the rushing waters.
Notes have also been left and for many people this is a quiet, somber spot on the roadway once a disaster zone.

Nearby on Olive Mill and Hot Springs,  two bouquets have been wedged in the fence.
There are still two children that were never found in the disaster.
It is a sign the community has not forgotten.

"Oh absolutely and we still very much live with the sense of their presence,"  said Westmont College President Gayle Beebe.

But the community has also come back in ways that were hard to envision during the disaster.

Yolanda Clements was walking into a grocery store and said,  "I am sorry some people have empty lots but they did a beautiful job with the streets. The workers here are fantastic."

The mudflow badly damaged North Jameson lane and federal funds came in to create walking trails  to connect families with their neighborhoods and also provide a safe passage for children walking to school.

McDonald said, "the community as a whole, everybody stepped up.  We all got together and everybody was so supportive, so loving.  It really made me remember everything I love about Santa Barbara.

Beebe spent 7 years in Michigan before coming to Westmont and said, "people really look after each other.  That is the spirit of Santa Barbara and we have seen the best of people come out."

Looking at the recovery of homes and open space after the destruction it's been called, "extraordinary  from all aspects," by Mountain Drive resident David Scharps who said his house shook during the storm and rolling boulders nearby in the creeks.
Now  he says the hills are coming back, "because of all the rain there's so much growth  a lot of it filled in."

Even though the risk of damaging hard rains still exists for a couple of years, those living here say for now,  they are safe, secure, relieved and together. 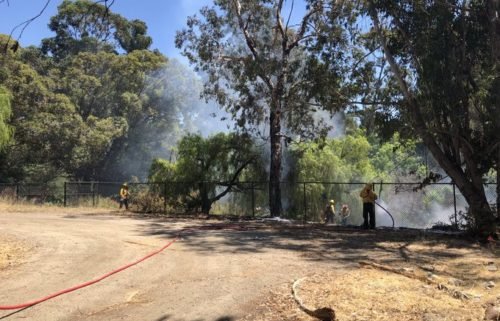