House Democrats say new evidence could still come to light about President Donald Trump’s dealings in Ukraine during his Senate impeachment trial, but several Senate Republicans appear to be throwing cold water on allowing any additional material to be presented in the Senate.

The House Intelligence Committee on Tuesday released documents from indicted Rudy Giuliani associate Lev Parnas, which provided new details on how Giuliani and his associates sought to meet with the Ukrainian President and members of his government as they sought dirt on former Vice President Joe Biden, worked to oust US Ambassador Marie Yovanovitch from her post and even apparently conducted surveillance of her in Kiev.

On Wednesday, the House Judiciary Committee published an even lengthier trove of documents from Parnas ahead of the House’s transmission of the impeachment articles, including text messages Parnas exchanged with a number of officials, as well as voice messages with Giuliani and attorney Victoria Toensing. The materials were published as part of the House’s evidence ahead of the Senate trial expected to begin next week.

In addition to the voicemails, the materials include photos Parnas took with a number of US officials, as well as Parnas speaking about former national security adviser John Bolton’s departure in September 2019 and rooting for Secretary of State Mike Pompeo to leave as well.

“Bolton is out” and “Pompeo is next” Parnas texts on September 10. “Awesome!!!!!” responds Harry Sargeant, an oil magnate whom CNN has previously reported on as being involved in discussions about making changes to leadership at Ukraine’s state energy company.

The new Parnas documents ratcheted up the push from Democrats for the Senate to allow documents to be obtained during the trial that the Trump administration blocked in the House impeachment inquiry. House Intelligence Chairman Adam Schiff, the House’s lead impeachment manager, said his panel was still poring through the Parnas materials.

“We are still going through, because the volume is so large, the materials we received … so it’s entirely possible there will be new and important evidence that comes out of the information that we’ve been receiving,” Schiff said Wednesday.

House Judiciary Chairman Jerry Nadler, also an impeachment manager, said “there may very well be” new evidence, and argued the Senate would allow it to be presented “if the Senate is a real trial.”

New material could also emerge thanks to Freedom of Information Act lawsuits from watchdog group American Oversight, which struck an agreement to receive documents from the Department of Energy on January 28.

But several Senate Republicans were non-committal on whether they will allow new evidence to be presented in the Senate trial, and they brushed aside the new revelations that emerged Tuesday.

“I wonder why the House did not put that into the record and it’s only now being revealed,” said Sen. Susan Collins, a Maine Republican viewed as a key moderate. Told that Parnas just turned over the documents to the committee, Collins said, “Well doesn’t that suggest that the House did an incomplete job then?”

The Intelligence panel sought records from Parnas in September, but he first refused to comply with a subpoena and then had to request a judge to agree for him to provide the materials to Congress. It is expected that Parnas’ records released Tuesday will be admissible in the Senate trial, as they were transmitted to the Senate as part of the House’s evidence accompanying the articles.

If more evidence emerges during the trial, it’s an open question about whether that would be allowed to be presented.

If there’s an objection by a senator or the President’s defense team to new evidence, Chief Justice John Roberts could rule on it or punt on the issue and let the senators decide. Senators could also overrule the chief justice. Fifty-one senators would be needed to approve allowing new evidence to be presented.

But GOP senators on Wednesday steadfastly refused to commit to allowing new evidence.

“The question would be why then did they bring the articles of impeachment if they didn’t hear from the witnesses they wanted to hear and hadn’t considered the evidence they want to consider?” said Sen. Lamar Alexander, a Tennessee Republican. Asked if that meant he’s opposed to hearing new evidence, Alexander said: “I didn’t say that.”

Sen. Roy Blunt of Missouri, a member of Senate Republican leadership, said: “That sounds like a decision the chief justice and the Senate may have to make… I guess I would just deal with that as it comes up.”

Sen. Thom Tillis, a North Carolina Republican who has aligned himself closely with Trump amid his reelection fight, knocked the House for impeaching the President and then seeking more evidence.

“I really wish the House had done their job so you weren’t having to ask me that question,” he said. “They seem to have done a lousy job.”

There are some new details detailing the role played by Parnas, who worked with Giuliani to oust Yovanovitch and then to push for Ukraine to investigate former Vice President Joe Biden and his son Hunter Biden.

Parnas’ texts with Sargeant appear to show a previously unknown line of funding for Parnas and Giuliani’s efforts to smear the Bidens and remove Yovanovitch. Parnas’ text messages also show him reacting to news stories about political pressure on Trump to remove Yovanovitch. “Believe me she is gondo (sic),” Parnas wrote on March 24, 2019.

Parnas and his business partner Igor Fruman were charged with campaign finance violations for a $325,000 donation to America First. Prosecutors allege they used a shell company to disguise that they were behind the donation. Both men have pleaded not guilty.

The messages also include texts from Parnas asking a GOP fundraiser Joseph Ahearn, the chief fundraiser for Trump super PAC America First Action, to “pass on the message” that the US needs an ambassador to the Ukraine who is loyal to Trump in the weeks he removed Yovanovitch from her post.

In one of the text messages, Parnas asked Ahearn to have the President’s son Donald Trump Jr. retweet an article. “Sent,” Ahearn replied. In another text, Parnas sent Ahearn a photo of him wearing what appears to be a bulletproof vest, adding that he’s heading to a meeting in May 2019. Ahearn warned Parnas to be careful.

In another September 2019 text exchange, Parnas appears to send former Ukraine prosecutor general Yuriy Lutsenko a draft statement of what Lutsenko planned to say publicly about his interactions with the US in corruption investigations.

House Speaker Nancy Pelosi, who withheld the impeachment articles for four weeks after the House passed two articles of impeachment last month, has touted the new developments and information as a sign her decision to wait was an effective one. Democrats have argued that Senate Republicans are trying to cover up the President’s misconduct by rushing through the trial, and they’ve argued the delay put the focus on whether the trial would have witnesses.

In addition to four witnesses Democrats are seeking, Senate Minority Leader Chuck Schumer has called for the Senate to agree to subpoena documents that the Trump administration blocked the House from obtaining. During the House’s impeachment inquiry, the administration refused to comply with multiple subpoenas to agencies for documents, and the Intelligence panel largely succeeding at obtaining documents from associates like Parnas, former officials like former US special envoy Kurt Volker and subpoenas to private companies like AT&T and Verizon.

“Each day that goes by, the case for witnesses and documents gains force and gains momentum,” Schumer said on the floor Wednesday. “I don’t know how any member of this body could pick up the newspaper this morning, read this new revelation, and not conclude that the Senate needs access to relevant documents like these in the trial of President Trump.” 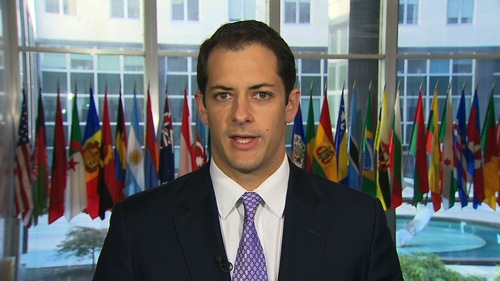