Two growing wildfires in eastern Arizona have burned more than 109,000 acres as of Monday afternoon, according to officials at the interagency Incident Information Center.

The Telegraph Fire has scorched 56,626 acres in and near the southern edge of Tonto National Forest and is 0% contained, according to Incident Commander Dave Bales. He said the cause of the fire is “human,” but is also still under investigation.

The Incident Information Center said the fire is less that 1 mile from the community of Top-of-the-World, which has about 250 people,.

“It is a fast moving and dynamic fire,” the center’s website (InciWeb) says. Growth is attributed to the winds and the brush, such as chaparral, the center said.

Officials ordered an evacuation for residents in the area of Top-of-the-World, the Pinal County Sheriff’s Office said Sunday morning.

“If you choose to ignore this advisement, you must understand emergency services may not be able to assist you further,” the office said on Twitter.

The fire had burned a few miles south of Superior, a town of about 3,000 people.

To the east, the Mescal Fire in the Mescal Mountains has burned 52,887 acres and is 8% contained, according to the Incident Information Center.

“Firefighters made progress today building and reinforcing fireline, despite the continued hot and dry weather,” the center said. “Extreme fire behavior continues to dictate how and where firefighters can safely build line to protect the communities, and powerline.”

Residents in several areas have been told to evacuate, according to the Gila County Health and Emergency Management Facebook page.

The cause of the fire, which started early last week, is under investigation.

Part of the fire is on land of the San Carlos Apache Reservation. Evacuation orders included the area of San Carlos High School, according to the tribal emergency response commission; the school is on the reservation.

No deaths or injuries have been reported in either fire. 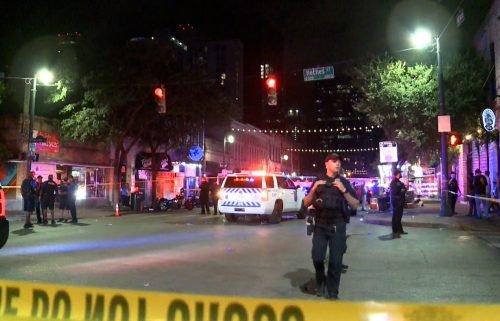