On a ridge overlooking the foothills of the Sierra Nevada Mountains, it would have been possible to see the first flickering flames of the Oak Fire and then how it engulfed its surroundings.

It took just 24 hours to mushroom to 10,000 acres and become California’s biggest wildfire this year.

“That’s crazy fast,” said Joe Amador, one of thousands of firefighters from across the state now deployed to fight the blaze.

“In the initial stages it was wind-driven and terrain-driven,” he told CNN, pointing to rolling hills, peaks and valleys that fire crews call “chimneys” that can help to spread embers and fire rapidly.

Winds were light on Thursday, allowing an inversion layer to form, which kept flames shorter and held down the thick smoke blanketing the hills outside Mariposa, close to Yosemite National Park — a blessing for the teams trying to contain the fire and protect buildings.

“We’re in extreme conditions, but things can always get worse,” Amador said ruefully. “Every year we talk about record -setting years, and this year is no different. And we’re not even in the thick of things yet.”

The “megadrought” driven by climate change that is affecting California and other western states has left plenty of dry, flammable material that can become fuel so quickly, especially when humidity is low and winds are high.

And that means grim records are barely being set before they are burned through, again.

Amador, his Cal Fire colleague who is up from San Diego, added: “Every year it seems like we’re out here fighting these record-breaking fires.”

Fire trucks from all corners of the state can be seen around the fire, along with teams from the California Highway Patrol, the PG&E power company, the North Fork Mono Tribe, inmates, park rangers and the Merced-Mariposa Cattleman’s Association.

In California, a mutual-aid agreement directs fire personnel wherever they are needed and when it’s bad, many helpers and volunteers join in.

With nearly 20,000 acres burned, 116 residential and commercial structures destroyed and hundreds more threatened, Cal Fire data shows the Oak Fire is the largest of the year so far in the state, and will not be fully contained for more than a week.

But the year is only halfway over and the Oak Fire is still small compared to blazes like last year’s Dixie Fire, which burned more than 960,000 acres, or the August Complex Fire in 2020 that became the state’s first “gigafire” in modern history, scorching more than one million acres.

Track wildfires and air quality across the US

Firefighter Amador says a slice of fortune is that the wildfire, though huge, is also one of only a few active this week.

“We’re concentrating a lot of the resources throughout the state in this location now so the citizens can rest assured that there’s plenty of resources here and, if needed, we can bring more — if the conditions worsen, such as high winds or higher temperatures or relative humidity starts to drop,” he said.

“However, if more fires break out, then they have to reassess the situation and we have to share resources.” 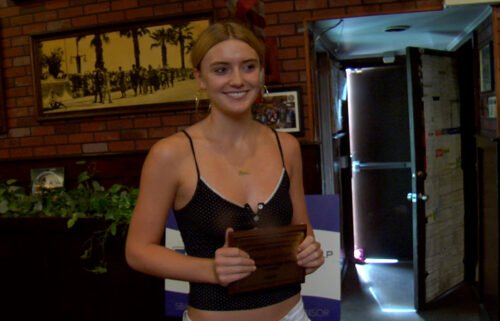