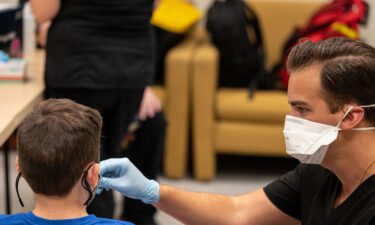 Some Republicans worry that Donald Trump’s persistent false claims of voter fraud could depress GOP voter turnout and turn off moderates and independents, potentially setting the party up for another Georgia-style disaster in the midterms.

As the defeated former President jumps back into the political fray, Trump is continuing to amplify his lies about the election — and even recently suggested that Republican voters sit out in 2022 and 2024 if the GOP doesn’t do more to back up his false claims about the last election.

The painful pair of losses in races for Georgia’s US Senate seats earlier this year still haunt the GOP — especially Senate Minority Leader Mitch McConnell, a Kentucky Republican who saw the majority ripped away from him. After Trump inaccurately told voters in Georgia that the election was rigged, some election observers believe the former President discouraged Republicans from going out and voting. Now some in the GOP fear a repeat, according to multiple Republican lawmakers and aides.

“Donald Trump gave away the Senate once. It looks like he’s determined to do it again,” said one House GOP lawmaker.

At the very least, McConnell and House Minority Leader Kevin McCarthy, a California Republican, would rather keep their midterm message focused on President Joe Biden, the economy and the border, even though Trump’s false voter fraud claims animate the base and many GOP candidates have made “election integrity” a cornerstone of their campaigns. Still, even of some of Trump’s most loyal supporters in Congress want to put 2020 in the rearview mirror.

But with Trump showing no signs of relenting in his demands to re-litigate his 2020 election loss — and most Republicans still refusing to reject his lies and threats to democracy — it’s shaping up to be a major headache and source of frustration for GOP leaders who want to win back their majorities by keeping Trump front-and-center in the party.

“I think it does hurt our chances if it becomes the dominant topic,” said another GOP lawmaker. “If the election is about Afghanistan, inflation, the border and crime, we will retake back the House. If it’s about ‘rigged elections’ we will lose independents and suburban voters we need to win.”

Added a third Republican: “It’s not a helpful message.”

‘He remains the biggest draw in our party’

GOP leaders, however, dismissed the idea that Trump’s one-track focus on the 2020 election will hurt their midterm strategy and expressed confidence that the former President will boost voter turnout, saying he remains a popular figure in the party.

Republicans also have a strong chance of winning back the House. They only need to flip five seats, and they have both history and redistricting on their side. The House GOP’s campaign arm has also been bringing in some record-breaking fundraising hauls, in another sign of strength and enthusiasm.

“I’m confident that Republican voters across this country are fired up to vote in the midterms,” said Rep. Tom Emmer of Minnesota, the head of the National Republican Congressional Committee. “The former president, he’s a private citizen and he of course is entitled to his own opinion.”

GOP leaders, particularly in the House, are hugging Trump tightly and making clear they view him as an asset in their quest to win back power. The former President is headlining upcoming fundraising events for both the House and Senate GOP campaign arms, even as he continues to publicly attack McConnell.

“He remains the biggest draw in our party and we’re happy he’s helping our efforts to fire Nancy Pelosi,” Emmer added.

And Republicans say that behind the scenes, Trump is actively engaged in helping map out a strategy to win back the House.

But publicly, it has been a different story. Trump, who appeared along a slate of establishment Republicans at an Iowa rally last weekend, recently said “the real insurrection” happened on Election Day in November 2020; recorded a video in support of Ashli Babbitt, the rioter who was shot and killed after storming the Capitol; and said this week that the Republican Party needs to make the “Presidential Election Fraud of 2020” its top priority.

And some of Trump’s behavior and rhetoric suggests he cares more about his own image than the success of the GOP. He said during a recent radio interview that he would rather have Democrats win seats than some of the Republicans who voted to impeach him. And he said late last month that Democratic candidate Stacey Abrams would have been better than Gov. Brian Kemp, the Georgia Republican who refused to overturn the election results.

“The Republican Party has made it very clear that blind loyalty to Donald Trump’s ego is the only principle they hold fast to,” said Rep. Sean Patrick Maloney of New York, chairman of the House Democratic campaign arm, in a statement. “Yesterday was just another reminder that Trump’s toxic rhetoric looks very different when he isn’t on the ballot.”

But even as Republicans fret the idea of Trump using his megaphone to focus on the 2020 election, very few Republicans have been willing to call out his lies. They either shrug their shoulders and in some cases embrace his false claims.

House Minority Whip Steve Scalise of Louisiana, when pressed repeatedly by Fox News’ Chris Wallace, refused to say on Sunday whether he agreed with Trump that the election was stolen.

In response, Rep. Liz Cheney of Wyoming — one of the only Republicans willing to stand up to Trump — tweeted: “Millions of Americans have been sold a fraud that the election was stolen. Republicans have a duty to tell the American people that this is not true. Perpetuating the Big Lie is an attack on the core of our constitutional republic.”