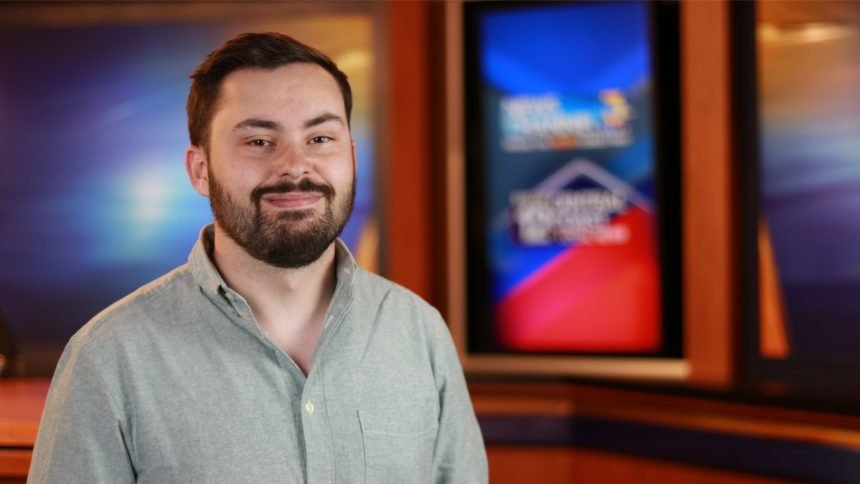 Travis Schlepp is the Digital Content Director at News Channel 3-12.

Born and raised in the great state of Montana, Travis got his start in the business working at his hometown news station, KTVQ in Billings.

Travis graduated from Billings Skyview High School in 2009, where he participated in multiple clubs and music programs and attempted (unsuccessfully) to make the varsity football team.

After graduating high school he attended Montana State University in Bozeman where he majored in Film and Photography and later English. At the end of his college career he returned to Billings where he worked a few odd jobs before finally settling on news as a profession.

While at KTVQ, Travis was a jack of all trades, working as a producer, photographer and reporter covering breaking news, community events and high school sports. Having spent one too many winters in Montana, Travis, his now-wife, Hannah, and their dog, Ellie, packed up their lives into a trailer and headed for the California coast.

Travis cut his teeth in the California news world working as a digital journalist and assignment desk editor in the News Channel 3-12 Santa Barbara newsroom.

He was part of the Emmy Award-winning news team that lead the way with unprecedented live coverage of the Thomas Fire and the ensuing Montecito Mudslide. He spent multiple nights sleeping on a cot in the back of the newsroom during the wall-to-wall coverage of both disasters.

In 2018, Travis became Digital Content Director following a brief sabbatical from news. He hasn't looked back since.

Travis enjoys playing pickleball, lounging on the beach and drinking craft beer. Travis is deeply passionate about dachshunds, Disneyland, the Beatles and sports teams from Wisconsin -- even though he's never stepped foot in the state. You can keep up with Travis by following him on Twitter, where he tweets incessantly about the Milwaukee Bucks.