SANTA BARBARA COUNTY, Calif. - Santa Barbara County families and residents got outside on Saturday to join in the fight against Alzheimer's disease.

The annual Walk to End Alzheimer's, organized by the Alzheimer's Association, invited residents to walk in small groups on sidewalks, tracks or trails across their local communities in order to raise money and awareness for Alzheimer's care, support and research.

“This year’s Walk to End Alzheimer’s will be everywhere,” said Lindsey Leonard, executive director of the Alzheimer’s Association California Central Coast Chapter. “The pandemic is changing how we walk, but it doesn’t change the need to walk. This year, more than ever, we need to come together to support all those affected by Alzheimer’s and other dementia. With the dollars raised, the Alzheimer’s Association can continue to provide care and support to nearly 3,000 families along the Central Coast during these difficult times while also advancing critical research toward methods of treatment and prevention.”

Many participants said they are walking in honor of a family member who passed away from the disease.

“I think we all have that passion to find a cure when we are hit hard with the disease,” Leigh Cashman said, an Alzheimer's Advocate and member of the Alzheimer's Women's Initiative. “The Walk is a great opportunity to keep everyone engaged in this fight; it doesn’t end because of other things going on and we are here to make a difference.”

At the beginning of Walk day, walkers were able to view a virtual Opening Ceremony featuring Andrew Firestone and other local speakers who shared their personal stories.

After walking, participants were invited to safely experience the view-only Promise Flower Garden, located at the Santa Barbara Mission. Flowers will be planted in different colors, honoring the personal reasons participants join together to fight Alzheimer’s and all other dementia.

According to the Alzheimer's Association, more than 5 million Americans are living with Alzheimer's disease. It is now the sixth-leading cause of death in the United States.

For more information, visit the Alzheimer's Association website at alz.org. 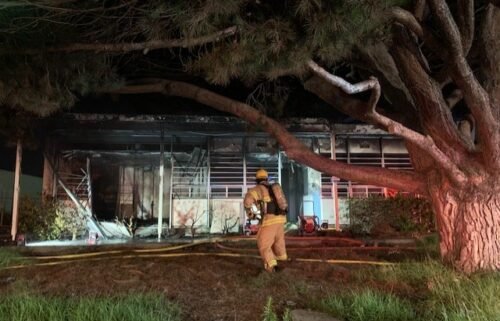