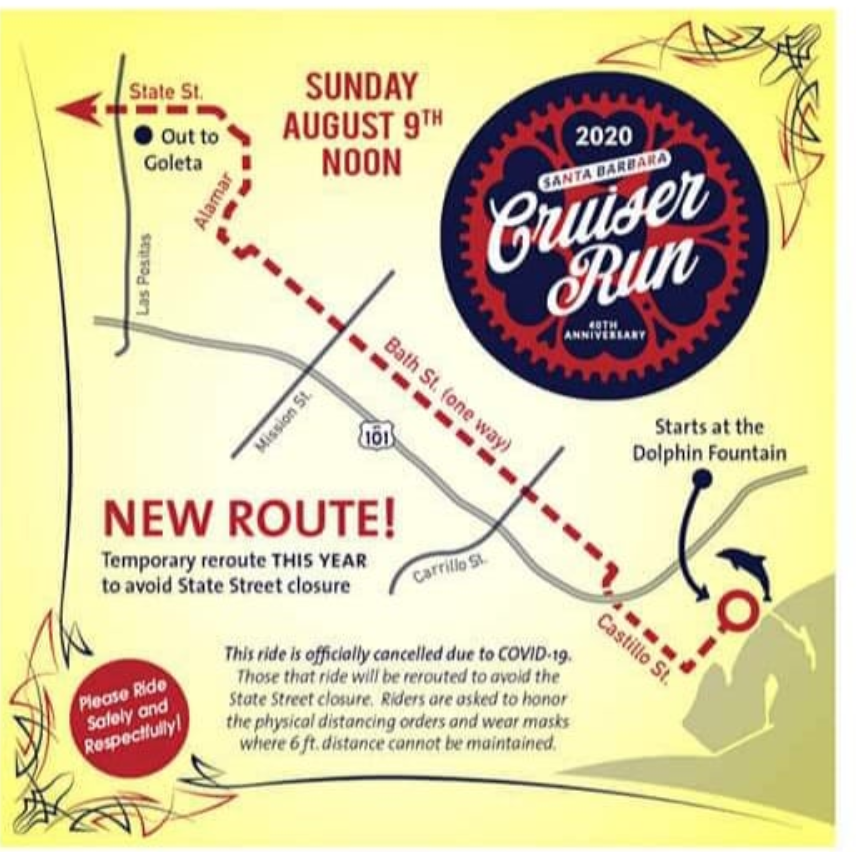 SANTA BARBARA, Calif. - It's still to be seen if hundreds of bike riders will come out Sunday at noon in Santa Barbara for the annual Fiesta run, but in advance comes a warning from the police.

The ride has become the largest of its kind in Santa Barbara.

It started 40 years ago.

This year because of COVID-19, and the development of the downtown promenade there will be changes.

The ride normally goes up State St. from the foot of Stearns Wharf.

This year it will go west to the Castillo St. and into downtown through the freeway underpass. From there it connects with Bath St. and riders will follow that route up through downtown instead of on State St.

The route is posted on the Cruiser Run Facebook page.

Santa Barbara Police Public Engagement Manager Anthony Wagner says the department expects the riders to move on the course safely. They will encourage those at the event to wear masks and have a six-foot spacing.

"I think that while a vast majority of riders are riding responsibly," said Wagner. "Riding into oncoming traffic, thwarting the public's right of way to be a pedestrian and generally having a caustic relationship on your bike with the general public is something that the Santa Barbara Police department is going to frown on."

There's at least one message that's been posted on some posts that the ride is cancelled.

Organizers who have put out information on the run have encouraged those participating to ride safely.

In the past this ride has been a popular one for all ages, and many people come to Santa Barbara just for this event. Often those on the ride are longtime friends, and look forward to the annual event.

About five years ago the ride became more organized after several years of issues involving multiple violations ranging from failing to stop at red lights to blocking an intersection.

In the last few years, the riders have left in groups based on the signal light pattern and most stayed in the bike lanes throughout the route for an enjoyable ride.

Along the way there's a stop on Hollister Ave. near Modoc before the final stretch of the ride to Goleta Beach Park.

More information can be found at : Santa Barbara Cruiser run 2020