Rosemary Connelly just wants to have a good time. The 92-year-old feels the day is near now she has her second dose of Covid-19 vaccine.

A resident at Roosevelt Care Center in Old Bridge, New Jersey, Connelly misses her family, which includes five grandchildren and six great-grandchildren, one of whom was born during the pandemic. She wants to see their faces, especially the newborn she hasn’t met, and join in family get-togethers and birthday soirees — and she wouldn’t mind a bloody Mary or glass of white wine.

“I’m getting out of here and partying,” she said when asked her plans upon being cleared for outings. “I miss seeing my family. I miss their smiles, their hugs and their kisses. I miss the freedom of going out.”

The first order of business will be to round up the babies — and their parents, of course — and “have fun and have a party like we used to,” Connelly told CNN.

“That’s what old people miss,” she said. “They don’t miss very much in life.”

The vaccine doesn’t make seniors bulletproof, but it makes them safer — and hopeful, delivering a sense of relief after a year of oft-lonely lockdown away from the loved ones they rely on not just for errands and caretaking but conversation, company and touch.

Almost 10 million people in the United States have received their second dose. About 12% of the recipients are residents or staff at long-term care facilities, according to the Centers for Disease Control and Prevention, but that doesn’t mean the more than 600,000 seniors who’ve gotten both shots can jump back into their pre-pandemic lives.

Depending on the state and facility, restrictions remain in place at most assisted living, skilled nursing and retirement communities. Federal guidelines advise even after the second dose people should continue wearing masks and distancing. The CDC may soon update that guidance, as Dr. Anthony Fauci, director of the National Institute of Allergy and Infectious Diseases, said Monday, “I believe that’s going to change.”

Connelly frets over the lost year with her youngest. Video calls aren’t the same as in-person great-grandmotherly love. She worries the children “might hear you on the phone or see you on a screen, but it’s not the same. They don’t know who you are. They thinking they’re playing with a game.”

Seniors are thirsty for normalcy, or at least what will pass for normal once the pandemic is over. It means a chance to go out for coffee, visit the beach or return to a favorite restaurant, but most of all, it means being close to family — and not in the metaphorical sense.

Gerrie Pearlin lives at Dominican Oaks in Santa Cruz, California. She misses trips to the shore and to her favorite downtown coffee shop, but she mostly longs for the bits of culture that coronavirus has stolen — the bookstore, the theater, the “wonderful symphony.”

The 93-year-old’s daughter and son-in-law live nearby. They drop off groceries, and Pearlin enjoys seeing them and chatting from 6 feet away, but she’s ready for a real visit.

“That’s what we do miss, a good hug,” she said. “We’re in a very protected world. Even though you get frustrated with it, you have to sit back and say, ‘I’m damned lucky.’ Everyone has complaints, right? That adds to your good mental health. Of course, we complain, but it’s in a very different context.”

Mary Ellen Philp, 93, wants to see family as well. A resident of Bellbrook in Rochester Hills, Michigan, north of Detroit, she can’t see or walk as well as she used to, so while she appreciates video calls and waving to her children and grandchildren from her apartment balcony, she feels she’s missing out on their lives.

One of her great-grandsons is about to turn 3 and just discovered music. He’s constantly dancing, she said.

“They are funny and cute and, you know, I just like to watch them,” she said of the youngsters among her 11 great grandchildren.

Philp, too, considers herself fortunate because her daughter is a longtime employee of Bellbrook. Philp has spent about half of her two years at the community in lockdown, so seeing her daughter buoys her.

“I catch a glimpse of her periodically,” she said, adding with a chuckle, “Otherwise, I’d be a stark raving maniac if I didn’t see Margaret.”

Joe Sanders of Princeton, West Virginia, can’t wait to get back to Cracker Barrel for country ham and red-eye gravy. He wouldn’t mind a fishing trip, too. His days of hiking into the mountains for trout or hooking sailfish off the Outer Banks have passed, he said, but he’d love to hop on a boat and go looking for freshwater bass.

The second shot, which the 93-year-old received in early January, brought hope that a return to those pastimes is coming.

“I felt like, ‘Boy, I’m going to make it,’ OK? I was just really relieved, and I have hope that I’m going to get out of here and do some things,” Sanders said. “That kind of sustains you, instead of feeling you’re going to be here till the end.”

While headlines abound chronicling hiccups and worse in the national vaccine rollout, administrators at several senior facilities say their campaigns have gone swimmingly. Two things the facilities have in common? Communication and a sense of community.

Larry Pack, CEO of Stonerise Healthcare, oversees 17 facilities in West Virginia and Ohio, including the Princeton location where Sanders lives. In addition to education campaigns — including forums with medical directors and Gov. Jim Justice’s public service announcements — the decision to partner with small pharmacies proved a boon, he said.

Small businesses are nimble, with less bureaucracy, Pack said, and the state’s approach makes it easy to find the right person to address issues.

“That’s really what helps us more than ever: It’s all personal,” Pack said. “The pandemic has been the most difficult part of my professional life, no question. We finally have a tool to fight with.”

Bethany Retirement Living, which has more than 500 residents at two locations in Fargo, North Dakota, partnered with a regional pharmacy chain, said spokesman Grant Richardson, who also credited a community approach to the rollout’s success in a state where “we’re really connected; we’re all related to someone down the road.”

Roosevelt Care Center at Old Bridge, where Rosemary Connelly lives, had New Jersey Gov. Phil Murphy on hand when resident Mildred Clements, 103, and nurse Esther Moody became the state’s first recipients of the vaccine. Murphy returned when they received their second doses January 18, said Bentzy Davidowitz, administrator at the facility where more than 90% of the 168 residents have received both doses.

Other facilities added creativity into their campaigns. Harmony Square residents in Brentwood, Tennessee, gathered to smash a chocolate-filled piñata shaped like a Covid-19 germ. Garden Valley Retirement Village in Garden City, Kansas, had health care workers inject seniors as they posed with signs that read, “Hit me with your best shot” and “Right to bare arms.”

Montage Hills Senior Living in Denver made a party of it, complete with balloon animals, music, a photo booth, games, shots (of Gatorade) and a whiteboard where residents wrote down what they’re looking forward to, executive director Don McDonald said.

‘Dance in the rain’

Going out for an ice cream or movie. Getting their hair done. Taking a trip to Walmart. Watching a football game with the boys. Breaking bread with a friend or neighbor. Playing bingo. Going to church. Seeing unmasked people smile. Holding a bridge tournament. Conversing face-to-face with no Plexiglas. Seniors say they’re prioritizing the little things.

At Dominican Oaks, where all but three of the 195 residents have received their second shot, Pearlin isn’t the only one missing culture, said Dominican Hospital President Dr. Nanette Mickiewicz. Her residents miss day trips to San Francisco’s museums and to Carmel’s outdoor malls and boutiques. They long for their visitors: professors from University of California Santa Cruz, authors and musical acts, including an opera singer who used to perform monthly.

“Sitting outside mom’s window doesn’t work when there’s snow on the ground, the wind’s blowing and the low temperature is 3 degrees above zero,” Richardson said. (The low in Fargo this week is actually minus 22.)

With the vaccine comes the promise of immunity to a virus that has killed almost a half million people in the US, the overwhelming majority 65 or older — but also the promise of returning to simple pleasures.

“Excitement is a good word, and hope can do a lot of things for people, but after 10 months, hope starts wearing a little thin, too, so (the vaccine) has really reinforced their hope this will be over soon,” Richardson said.

Philp has her hopes set on a trip to the park along the Clinton River, just outside Rochester Hills. To family members reading: She wants a picnic, with chicken and her homemade potato salad — with a little Dijon mustard mixed in with the mayo and that special ingredient.

“I like thinly sliced radishes in my potato salad, which few people do, but it really gives it a little pizzazz,” she said.

Sandy Comitini, 64, is eager to see her mother, Connelly, return to her “partying” ways. She’s been calling Connelly “20 times a day,” to the point her mother sometimes takes the phone off the hook.

Connelly has battled loneliness by playing solitaire, perusing Facebook, reading mystery novels and crocheting a blanket for her great-grandson — but her family is what she craves most.

They’re already planning the first shindig: They’ll either book the party room downstairs at the Old Bridge facility or, if it’s warm out, they’ll head to Comitini’s brother’s backyard pool.

“We’ll have the freedom to do what we took for granted,” the daughter said.

Asked how she’ll make sure she never takes such moments for granted again, Comitini paused a beat before answering, “Enjoy every moment. Dance in the rain.” 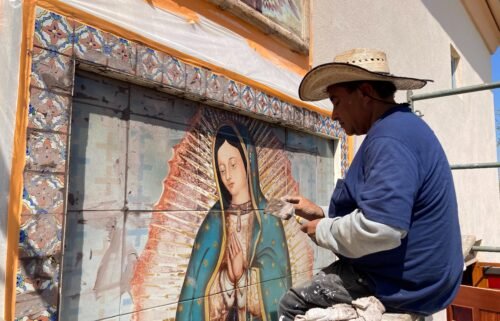